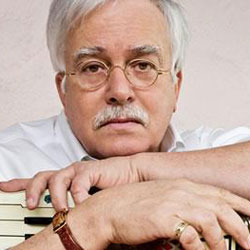 There is a sense that Van Dyke Parks is only now getting full recognition for his contribution to pop music as a solo artist. As a producer and arranger his career has had plenty of coverage, from the obvious – his work on the Beach Boys‘ long lost but recently released album Smile – to the less forthcoming, his work with bands such as the Shortwave Set or in his work enhancing Joanna Newsom‘s wonderful Ys album.

Happily Bella Union are redressing the balance by releasing remastered versions of Parks’ first three albums, Song Cycle (1968), Discover America (1972) and The Clang Of The Yankee Reaper (1975). Listening back to them it sounds like they were written yesterday, such are the adventurous forays in to a wide range of musical styles, each undertaken with the highly original and distinctive voice of Van Dyke himself.

Song Cycle is something of a legendary album, written in to musical lore by Warner Bros themselves, whose advertising campaign leaned heavily on the album’s cost in an eventually successful attempt to recover it. “How we lost $35,509.50 on ‘The Album Of The Year’ (Dammit)” ran the stark headline, and the campaign eventually reaped its rewards, with Parks telling how the costs were recovered in three years.

The album is a show in everything but name, cleverly conceived to span an album’s length in a closely structured, classically sourced way. With rapid mood changes between numbers it is notable not least for its strong old American core that takes in the influences of George Gershwin, Aaron Copland, John Philip Sousa and even, looking further back, the hymn writing of William Billings. Parks brings these and more to the table, dressing his source material with more original melodies and sparkling orchestration. The All Golden, which contains an adaptation of the Battle Hymn Of The Republic and other hymns and marches, is the ideal example of how Parks could introduce an unpredictable streak even to this most staple material, while Donovan’s Colours shows off a rippling harp and the distinctive clack of the xylophone. Vine Street, meanwhile, kicks off the album as if about to break in to strains of Viva Las Vegas – which it stops just shy of doing.

Discover America might have been a suitable title for the first album, but in the Song Cycle follow-up Van Dyke looks closer at Calypso, setting very early examples of the form in a way that make them his own. Again the scoring is brilliant and beautiful, but not as urgent and hyperactive as on its predecessor. Here the music learns to relax more, and as a result the gentler side of Parks is revealed in music that has a softer emotional centre. Taken in full it feels like a lettercard of folksongs and national identity cards, and in Ode To Tobago and Occapella it captures the unique innocence of early Calypso, appealing and often quaint.

The adaptations of Lord Kitchener and Mighty Sparrow and their contemporaries throw the Americana of Song Cycle in to appropriate relief, the pair of albums combining to offer a slightly more balanced view on the evolution of the country. With that said, G-Man Hoover remains a very weird song indeed, anticipating the songs of Frank Zappa both in its title and its half sung, half spoken style.

The Clang Of The Yankee Reaper starts off in progressive vein with its title track, the only original Parks work on the album. There is a strong hint here of the Chi Lites‘ Have You Seen Here, though the guitar line and Parks himself whistling softly in the intro give it an epic feel. Soon, however we are returned to the songs of Kitchener and Mighty Sparrow, Van Dyke’s preoccupation with Calypso taking hold. Tribute To Spree sways and swings with its vibrant steel pan and brass, not to mention its hyperactive chorus, while Iron Man layers the trumpets down thickly, to the extent where the song itself is in danger of being obscured. Throughout there is a strong affection on the part of Parks for his source material, and an enthusiasm bordering on the manic.

Finally Cannon in D completes the collection, misleading the listener by in fact drawing its source material from Bach’s chorale Ein Feste Burg. Parks gives it a cheeky nudge by compressing some of the harmonic movement so that it becomes more syncopated, giving Bach an unexpected dose of humour and closing the album with a smile on its face. That the chorale is actually an instrumental setting of text by Martin Luther reinforces the strong American connection, bringing us full circle to the hymn like episodes of Song Cycle.

This, then, is Van Dyke Parks’ American Trilogy. It’s a strong and frequently dazzling body of work, re-released in glorious high definition sound that brings forward the sheer chutzpah of his chosen orchestra. Despite copious use of wind and brass instruments everything has its own function and the scores are rarely overproduced, complementing a vocalist who can by turns be graceful and powerful, suave and humourous. If you listen to them all for the first time blindfolded, you would be hard pushed to pin down a date for when they were recorded, so original and modern do they still sound. What you will be able to witness is the glorious Technicolor invention, the work of a pop music visionary well ahead of his time.

Van Dyke Parks’ reissues of Song Cycle, Discover America and The Clang Of The Yankee Reaper are out now through Bella Union.