Spotlight: The Fall and Rise of Shoegaze 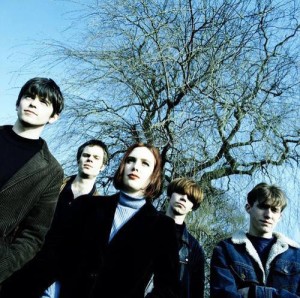 Maps‘ Mercury nomination this year has spotlighted a quietly building shoegaze revival which fans of Sigur Rós, Serena Maneesh and 120 Days might have detected.

James Buckley’s debut book Celebrate Myself is billed as the world’s first shoegazing novel. Here he charts the fall and rise of “the scene that celebrates itself”, from Ride, My Bloody Valentine and Slowdive (pictured) to today’s “nu-gaze” trailblazers and suggests you’re never alone when you’re a ‘gaze fan…

“They haven’t gone away you know.” Whilst Sinn Fein leader Gerry Adams was referring to the IRA in this infamous comment at a republican rally in Belfast a few years back, it could equally be applied to the legions of stripey t-shirt wearing, floppy fringed aficionados of footwear, memorably described as shoegazers.

Thankfully Northern Ireland is now at peace with itself and this upturn in the country’s prospects has coincided with a return to favour for the music that took its name from the lack of onstage animation displayed by its leading lights.

Whether defined by the head-splitting guitar feedback of My Bloody Valentine‘s Kevin Shields or the breathless vocals of Slowdive‘s Neil Halstead and Rachel Goswell, the latter a singer for whom the term ‘celestial’ may very well have been invented, shoegazing will always be associated with the late ’80’s and early ’90’s, the time before grunge and Britpop stalked the earth.

Record sales were modest, mainstream impact negligible, critical appreciation short-lived, yet still this loosely defined genre has stood the test of time. Approach that citadel of musical snobbery the independent record store, and ask for Ride’s debut album, Nowhere, or Slowdive’s recently reissued seminal Souvlaki and be rewarded with grudging respect not normally accorded to much of the musical output of the time.

Even the NME have belatedly got in on the revival, Nowhere recently making the cut as one of their top 100 British albums of all time, where it received endorsements from Brian Jonestown Massacre and, perhaps less predictably, Kasabian. A few weeks later Souvlaki, which includes a couple of tracks recorded in collaboration with Brian Eno, also featured as one of the magazine’s classic albums revisited. Other useful starting points for the uninitiated include Chapterhouse’s Whirlpool, Raise by Swervedriver and the Robin Guthrie-produced Spooky from Lush. For a lesser known gem check out Lovehappy from The Charlottes, described by the NME’s Steve Lamacq no less as “altogether more sexy than Kylie”, when awarding it 9/10. Sadly for the band it sold rather fewer copies than the diminutive Antipodean.

Arguments rage as to what constitutes membership of the gang, with the aforementioned Slowdive, Ride and fellow Thames Valley bands like Swervedriver, Chapterhouse and Moose enjoying universal acceptance as shoegazing royalty. Others, like Lush, Revolver, Curve and even early Blur (check out debut single She’s So High) are also closely associated with the “scene that celebrates itself” as it was less than charitably tagged by Melody Maker.

What’s undisputed is My Bloody Valentine’s standard-bearing status as the alpha and omega of the ‘gaze scene, with 1991’s Loveless enjoying mythical status as the high water mark for the scene. Even if Creation Records’ founder, Alan McGee, recently described them to the Guardian as his “joke band”.

Whilst shoegazing’s day in the sun was brief and eclipsed completely by the global phenomenon that was grunge, its legacy has continued to inspire subsequent artists as diverse as Black Rebel Motorcycle Club, The Dandy Warhols and Ulrich Schnauss (who covers Slowdive’s Crazy For You on the special edition of his sleeper hit album, Faraway trains Passing By). Maps‘ Mercury Prize nominated album We Can Create owes a clear and acknowledged debt to the more populist wing of shoegazing as exemplified by Ride, whilst something in the Scandinavian psyche obviously encourages detailed study of ones’ footwear, as an audience with Sigur Ros, 120 Days or Serena Maneesh will testify.

Older ‘gazers never hang up their laces either, with many including Ride’s Mark Gardener, Swervedriver’s Adam Franklin and Rachel Goswell having subsequent solo careers, albeit often producing a more mature and personal sound bereft of glacial landscapes. With the success of clubs like the excellent Sonic Cathedral and AC30 however, what’s certain is that, like in 1991, you’re never alone when you’re a ‘gaze fan.

James Buckley’s Celebrate Myself is out now through C21 Books.