Spotlight: The Making Of Nick Cave 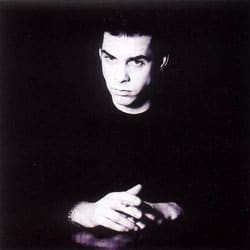 Nick Cave And The Bad Seeds’ first four albums, From Her To Eternity, The Firstborn Is Dead, Kicking Against The Pricks and Your Funeral… My Trial, have been remastered and reissued. Going back in time by a quarter of a century, what do they tell us about Nick Cave as an artist?

With Cave it is often difficult to separate the myth from the man. A happily married father who ‘commutes’ to work each day to write songs in his Brighton office, Cave has established a quasi-conventional lifestyle that is as odd in its way as the hell-bent decadence of his early solo career.
Normally when covering remastered editions of an artist’s early albums, the tendency is to reminisce about a golden era when the urgency of youth and a fecund imagination resulted in music that shines brightly against the gradual dulling of the creative muse in later years.

Cave is one of those ornery buggers who instinctively rebel against this rule. Starting with 1997’s The Boatman’s Call, he has been on a creative high for the better part of a decade, with last year’s DIG!!! LAZARUS DIG!!! staking a very good claim to be one of his finest albums. Hell, the man even managed to shake his middle-age ass without embarrassment on the souped-up primal rock ‘n’ roll that was 2007’s Grinderman project.

What then to make of the reissues of From Her To Eternity, The Firstborn Is Dead, Kicking Against The Pricks, and Your Funeral… My Trial, the first four albums in the Cave catalogue, originally released between 1984 and 1986?

Cave was fresh out of The Birthday Party, a wilfully destructive rock outfit that needed to disband before its members destroyed themselves, when he recorded From Her To Eternity. Recruiting guitarists Blixa Bargeld and Hugo Race, bassist Barry Adamson and multi-instrumentalist Mick Harvey (the first line-up of his famous backing band The Bad Seeds), this is the most unfocussed and sloppy album in the Cave catalogue.

Unable to totally divest himself of the rock tropisms of The Birthday Party, Cave rants like a man possessed on tracks such as Cabin Fever! and Saint Huck. Elsewhere there are signs of progress, notably on the spare, atmospheric The Moon Is In The Gutter and A Box For Black Paul. Cave hasn’t quite nailed his trademark deep croon at this stage of his career, but it is easy to spot the gestation of later classics such as Into My Arms in these early efforts.

The pivotal role The Bad Seeds play in Cave’s development as an artist is wrought large all over the intense title track, rescuing his overwrought gothic lyrical conceits by filling in the wide open spaces around the melody with a tremendous cacophony of scraped guitar strings and hammered piano chords.

Cave followed up his debut with The Firstborn Is Dead, and such is the progress made by the artist and The Bad Seeds that it is hard to believe that this recording was completed barely half a year after the release of From Her To Eternity.

The opening Tupelo is rightly championed as one of Cave’s masterstrokes. Drawing on a wide range of cultural sources, from the John Lee Hooker original about the flood in Tupelo, to Elvis Presley‘s stillborn twin brother Jesse and the apocalypse at the second coming of Christ, it is one of those rare songs that the listener wants to carry on forever. The Bad Seeds come to the fore, providing a dramatic musical impetus for Cave’s old-fashioned morality tale.

Whereas From Her To Eternity had buried Cave’s interest in the Old Testament and blues fables amid a flurry of shock-value gothic flippancies, on The Firstborn Is Dead his literary interests come over as an integral part of his search for creative expression.

Unfortunately, after the dramatic opening surge of Tupelo the album was bound to disappoint to a certain degree. Only an intensely psychotic reading of Bob Dylan‘s Wanted Man comes close. For the rest, the main interest lies in the development of the Cave/Bad Seeds musical rapport and the emergence of Mick Harvey as a creative foil to the occasionally wayward Cave.

Kicking Against The Pricks has always divided Cave fans. This collection of cover versions was certainly a major surprise upon its release, somewhat akin to the effect created by Elvis Costello when he visited Nashville to record Almost Blue five years earlier.

In retrospect, the album can be seen as an opportunity for Cave and The Bad Seeds to stretch their musical muscles on the exquisite melodies of corny pop classics such as By The Time I Get To Phoenix, Something’s Gotten A Hold Of My Heart and Running Scared. In fact, they are more successful than more obvious choices such as Hey Joe and I’m Gonna Kill That Woman, which sound a little too forced.

The progress made by Cave and The Bad Seeds in barely two years can be measured on Your Funeral… My Trial. The elegantly constructed title track and Stranger Than Kindness sound like an entirely different band from that on From Her To Eternity, while Cave’s experiments on his covers album reap their dividends with a more measured and naturally tuneful vocal performance.

The Bad Seeds still manage an ominous rumble on Jack’s Shadow and She Fell Away, but there is restraint and little nuances here that are far more effective than the unhinged stomp ‘n’ roll of Cave’s debut. The Brecht/Weill musical lurches on The Carny, meanwhile, indicated Cave was not suspicious of exploring new avenues, while a healthy dose of self-deprecating humour added a new layer of lyrical meaning to the deliciously depraved Hard On For Love.

And so the first wave of Cave reissues stops short of his first genuine classic, 1988’s Tender Prey. The groundwork had already been laid on these earlier releases and it is a testament to Cave and The Bad Seeds that each album stands up in its own right to repeated listening.

Little is added by the new remixes as Cave’s music was always set apart from the modernistic fetishes of the mid-’80s. Listen to Your Funeral… My Trial and DIG!!! LAZARUS DIG!!! back to back, and there is no great technical leap apparent. Fans may be drawn in by the accompanying documentaries by Iain Forsyth and Jane Pollard that include testaments from members of The Bad Seeds and celebrity fans.

But these reissues serve notice that Nick Cave was that rarest of beasts in this day and age – a work in progress. His development from hammy quasi-goth to literate singer-songwriter is marked on these four albums, and established the blueprint for a songwriting career that has little parallel in modern music.