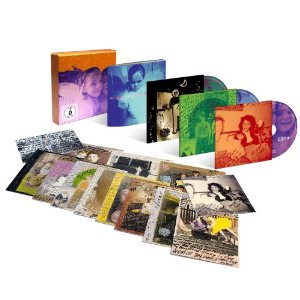 2011 has seen its share of excellent 20th anniversary reissues from the shamelessly longhaired and scrappy early days of grunge and alternative rock. To name a couple, Nirvana‘s lovingly curated Nevermind reissue is certainly stacked to rank among the year’s best, and Pearl Jam have continued the process of remastering their early works (this year seeing Vs. and Vitalogy re-issues) to mark their 20th year as a band. And adding to the nostalgia for a time before alt-rock radio was dominated by tasteless nu-metal sound-alikes, Smashing Pumpkins have released new remastered editions of their 1991 debut, Gish, and its 1993 follow-up, Siamese Dream.

“I am one, you are one. Infinite repeat,” writes The Smashing Pumpkins front man Billy Corgan in the liner notes accompanying the Gish deluxe edition. Corgan’s track-by-track commentary reads like the stream of consciousness, impressionistic ramblings of a disheartened post-modernist at times (“No one is there to catch your dreams where they fall. Your dreams are all mustard lies, you see.”), but perhaps that’s because he’s looking back over an expanse of twenty years at a time when his pursuit of stardom was still a dream, and his band was still making big, important music that would help lay out the archetype for the following decade.

Through the lens of time, both albums hold up incredibly well; Gish is rife with leftover hair metal flavours and heavy on relentless – if a bit unguided – ambition, while Siamese Dream still feels just as visceral and large-scale as ever. Bob Ludwig’s remastering punches up the drums and adds clarity and volume to the mix without overblowing it or excessively altering the overall sound, and the result is that these two albums sound incredibly modern, relevant, and invigourated. Familiar as it is now, the music hasn’t aged a day in two decades.

Each album is accompanied by an impressive and substantial collection of extras. The deluxe editions are packaged in high-gloss boxes (a bit difficult to pry open, but otherwise lovely) with re-imagined artwork, and each includes liner notes by David Wild, track-by-track annotation by Billy Corgan, assorted postcards and Polaroids, and a bonus disc of outtakes and rarities, as well as a DVD of a live performance at The Metro in 1990 and 1993 respectively. Many of the bonus tracks have appeared before on the full-length Pisces Iscariot collection, but there’s enough here to sate diehard fans and perhaps overwhelm newcomers. The Gish standouts include a demo of Daydream with Corgan on vocals in place of D’arcy Wretzky and an extended version of Drown with blistering alternate guitar solos. Siamese Dream includes exceptional demos for U.S.A. and U.S.S.R., as well as Moleasskiss from the much sought after Mashed Potatoes bootlegs.

It’s difficult to avoid looking at these first two albums in the context of the arc of Smashing Pumpkins’ career. Certainly, Mellon Collie And The Infinite Sadness is a grandiose high point in what would prove to be an uneven career shot through with band turmoil, problems with drug use, and the unsteadying effects of Corgan’s perfectionism and frequent bouts of depression. It’s often posited that Corgan lost his mojo when he shaved his head, Samson-like, and while this may be a ridiculous notion, Gish and Siamese Dream give this idea a certain amount of credibility. While the Pumpkins’ later albums would have their places of importance in the band’s canon (Infinite Sadness being arguably one of the best albums of the decade), these first two carry a sort of fuck-you confidence and cohesiveness that is unmatched by the band’s later work.

Gish, though, encapsulates everything that a great band’s first album should be: It’s scrappy and ambitious while channeling all its influences (My Bloody Valentine and Jane’s Addiction not the least among these) into a sort of missing link between the big metal of the ’80s and the primordial grunge that would follow. Jimmy Chamberlin’s nimble drumming matches D’arcy Wretzky’s bass attack perfectly before the hard-panned guitars and Corgan’s growling vocals come in, making I Am One an intense and electrifying opening track. The guitar work here is far more melodic and virtuosic than the noisy feedback-driven stuff that Corgan will later unleash on Infinite Sadness, and what we have here is a young musician, wide-eyed and operating at the peak of his abilities.

Siva rocks exceptionally hard, while Rhinoceros hints at the arena greatness of the band’s future. The hanging guitar squall that ushers in the guitar solo on Bury Me is a moment that remains dramatic and intense through repeated listens. The relatively low-key Crush and Suffer both offer glimpses of the band’s sensitive side, while the closing minutes of Window Paine offer unbridled, aggressive release through walls of power chords and violent but tightly syncopated drumming.

And while Gish is a fine first outing, Siamese Dream is a different animal altogether. Corgan famously suffered a nervous breakdown that led to hyper-perfectionism in the studio and tyrannical behaviour that further strained already fragile bonds between band members. Corgan overdubbed most of Wretzky’s and guitarist James Iha’s parts with his own playing, and he is said to have occasionally locked himself in the control room while working strings of 16-hour days one after another for weeks on end. Chamberlin’s drug habit and the band’s overall fear of distraction led them to record Siamese Dream far from home at Triclops Studios in Marietta, Georgia, where they didn’t know anyone, and where Chamberlin was hopefully cut off from his usual drug sources. The project ended up coming in late and grossly over budget, Corgan refusing to take shortcuts if it meant compromising the sound.

And the result is arguably one of the most important albums of the ’90s. Lead single Cherub Rock remains a cornerstone of the genre, and Today was both a huge success on alt-rock radio and one of the defining songs of its generation. Disarm, with its haunting church bells, is chilling and heartfelt, Corgan’s lyrics turning inward as he coped with depression: “The killer in me is the killer in you, my love. I send this smile over to you.” Siamese Dream is also a far more evenly distributed album than its predecessor, sounding in and of itself like a greatest hits compilation, each tune bursting with angst and anger, hooks and melody. Corgan is said to have made Chamberlin play the drum part on Cherub Rock until his hands bled, and he certainly took great lengths to alienate the rest of his band. Siamese Dream is very clearly an album born of great pain and anguish, and the result is nearly sublime in its emotional reach.

The Smashing Pumpkins story is not an easy one to tell, and often not an easy one to listen to, but the reissues of these first two albums demonstrate definitively that Billy Corgan, with all his eccentricities and relentless pursuit of perfection, is a key figure in one of the most important musical paradigm shifts of the last half century. He and his ragtag band of Pumpkins helped to drag rock ‘n’ roll kicking and screaming out of the ’80s and into a new form that an increasingly disenfranchised Generation X could embrace, and that’s something worth celebrating. Here’s hoping there are more Smashing Pumpkins reissues like these in the works.

Gish and Siamese Dream will be available 5 December 2011 in CD, Deluxe 2CD/DVD, vinyl LP and digital configurations though EMI.