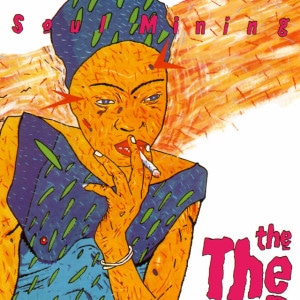 Possibly one of the greatest classics of the 1980s, The The’s Soul Mining remains to this day an often overlooked treasure. For those in the know however, it generally ranks admirably in even the most gargantuan of record collections, a monster of an album that has provided countless hours of entertainment and solace, Matt Johnson’s typically hard hitting lyrics resonating with many a listener. But the lyrics are only a part of the whole, a huge tour de force that has outlived its follow-up – the more commonly recognised Infected – by some distance and the reason is simple: diversity.

Released in 1983, the original album came at a time hinted at by Johnson in the captivating ‘news-sheet’ included in the 30th anniversary boxset that deals with the creation of Soul Mining entitled ‘This Is the The Day’, as he recalls a Britain of Charles & Di, Sinclair Spectrums “and of course, Maggie Thatcher”. What’s not recalled in Johnson’s notes though is anything about the music scene from the time: David Bowie had enjoyed a renaissance with his 15th studio album Let’s Dance in the spring while the summer saw the 5th and final release from iconic band The Police (Synchronicity). Michael Jackson’s Thriller was of course the album that stole the year but further long players of note included Tears For Fears’ The Hurting, U2’s War and ZZ Top’s Eliminator. Soul Mining arrived in October, enjoying only a fraction of the commercial success these big hitters had enjoyed yet in some ways it has outlasted them all, and having been penned by a 20 year old originally from the East end of London it is arguably the most remarkable achievement of the year.

Johnson had released Burning Blue Soul in 1981 (as Matt Johnson) but Soul Mining became the first official The The release. Recording got off to somewhat of a false start in New York under the guidance of producer Mike Thorne, with original versions of Perfect and Uncertain Smile from 1982 subsequently being scrapped (from the forthcoming album) after a last minute record label switch from London Records to CBS. In came a new producer, Paul Hardiman with Johnson on co-producing duties, a role which allowed him far more freedom than a young 19-20 year old would ever likely acquire in current times. Ex-Ultravox frontman John Foxx had a studio down in Johnson’s favoured East London (Shoreditch – Garden Studios) where the ‘new’ recordings would start in earnest.

The first and most telling aspect of Soul Mining’s diversity arrived with the introduction of some noteworthy musicians to supplement Johnson’s own abilities, and these ludicrously brilliant contributions provide perhaps the most enduring aspect of the record. The album’s opening track I’ve Been Waitin’ For Tomorrow (All Of My Life) is quite simply breathtaking, and the driving force behind its sheer magnificence is an exhilarating drumming performance by Orange Juice’s Zeke Manyika. The intensity of Manyika’s rapid, persistent thunderous drum pattern that follows the NASA like countdown (minus the ‘seven’) is utterly compelling and combined with Thomas Leer’s synth solo and Johnson’s lyrical ability it all adds up to a brilliant start.

Whilst there is pessimism and doubt throughout, This Is The Day offers a complete contrast, with optimistic lyrics of “this is the day, your life will surely change, this is the day, when things fall into place” ensuring that the diversity stretches to the song meanings themselves. And it’s another outrageously brilliant piece of musicianship that steals the show, Paul Wickens’ accordion contribution representing more diversity of instrument as well as pure genius in execution.

Johnson had originally intended the album to consist of just seven tracks and the reissue ensures that ‘purity’ is restored; much to Johnson’s fury, a well meaning A&R man for the US branch of the record label decided the album would be more of a commercially viable product with Perfect “stuck on at the end”, explains Johnson in the news-sheet. The final track on the 30th anniversary edition is, therefore, Giant, as originally intended; it’s another of the album’s stunning moments with Manyika again on drums along with Leer on the synth bass, its lengthy chanted outro featuring even co-producer Hardiman.

But for many, the most endearing piece of music on the whole collection arrives at the conclusion of the record’s first side: Uncertain Smile. The wide ranging contributions this time contain quite possibly the most stunning piano solo you are ever likely to hear on a rock record, courtesy of ex-Squeeze maestro Jools Holland who, according to Johnson, rolled up on his motorbike and laid down the quite incredible solo in one take on a baby grand piano (with just a single further change) having remarkably only heard the music just once.

The theme of diversity even reaches the package itself for this (belated) 30th Anniversary edition. With no CD release, the emphasis is primarily on a 180g vinyl remaster, all recreated after being dubbed from an original pressing recorded from Johnson’s Thorens TD-147 gramophone player that he pulled out of storage and refurbished for the project; for non-vinyl enthusiasts, a download is available. Other goodies include the fascinatingly informative news-sheet that depicts the making of the album as recalled by Johnson, along with a BASF tape reel card featuring credits and tracklistings as well as possibly the most coveted item of all, a second vinyl ‘Recollected’, featuring alternate versions and 12” mixes, including both the US and UK versions of Perfect.

The revolving carousel of musical instruments being used turns again for this must-have item for any self-respecting The The aficionado, with flute featuring on the 12” version of Uncertain Smile and David Johansen of New York Dolls providing harmonica on Perfect. A major part of The The’s overall appeal is unquestionably the fascinating artwork that adorns much of The The’s output, all contributed by Johnson’s brother Andy, also known as Dog. The cover to Soul Mining is a perfect example, a painting of one of African musician Fela Kuti’s wives smoking a joint but there’s much more to enjoy within the repackaged box set.

1986’s Infected would propel Johnson to a much wider audience, with a complete ‘album video’ accompanying the release and its controversial tackling of prostitution, the US and its relationship with the UK and of course AIDS via its notorious title track. Mind Bomb then further addressed Johnson’s political feelings and observations as he once again found himself being creatively influenced by serious subject matter.

Will there be a return for The The? Well, it all rather depends on Johnson’s time and focus. At the moment he’s happy writing soundtracks but there is a distinct possibility that another The The album may well surface, most likely centring around Johnson’s geopolitical stance. Often finding himself engrossed in events around the world such as anti-war campaigns in Syria as well as conspiracy theories surrounding such topics as the (alleged) moon landings, a new The The album may just have to rely on the entire world getting their act together to stop depriving his thriving and loyal fanbase of what they most want – surely reason enough for world peace?

Questioned by many is the transition between Johnson’s debut Burning Blue Soul and Soul Mining and how there seems to be a giant leap between the two; Johnson explains that the ‘missing link’ is in fact a missing album, The Pornography Of Despair. This may yet surface with Johnson planning on releasing something once he can locate the relevant tapes from his considerable stash. So even if a brand new album never arrives, we may yet be treated to something fresh after all; that will be the day our lives will surely change, once again.

The The’s Soul Mining (30th Anniversary Edition) is out now through Sony. Further information can be found here.

The The MP3s or CDs

The The on Spotify

More on The The
The The @ Brixton Academy, London
The The – Soul Mining (30th Anniversary Edition)