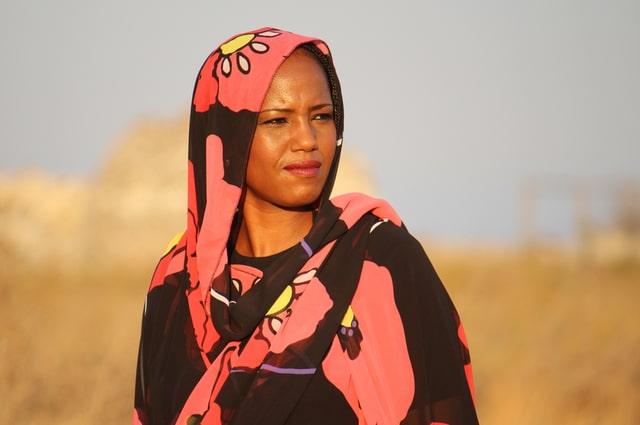 Aziza Brahim has forthright things to say about war, peace and humanity in the face of crisis and conflict. Born in a Sahrawi refugee camp in the Algerian desert, to which her mother had fled from the Moroccan occupation of Western Sahara – an ongoing state of affairs that has recently reached its 40th anniversary – her new album Abbar el Hamada (meaning “Across the Hamada”, ie. a type of desert landscape) is a commanding and compassionate musical statement about, and for, the age in which we live. Following on from 2014’s well-received Soutak, its 10 tracks call for peace, celebrate independence, tell refugees’ stories and underline the fundamental basics of existence, access to which not everyone in our world has, even in 2016.

Here, the now Barcelona-based Aziza guides us through the album and tells us a little about the inspirations behind each of its tracks.

I wouldn’t like to explain my songs completely because I would also like that every listener adds a personal meaning to the lyrics. So, I wrote a some notes about the general context of each song, that you can read below:

This song is a demand for peace, highlighting that, in many places of the world, and especially my own country, peace seems unachievable. My people are living for 40 years in purgatory, at the oldest refugee camps in the world, and everyday we are searching for peace, although it starts to fade. It is a contradiction that we are still demanding a basic human need, not only in my country but also in other parts of the world.

This song is an imaginary exercise that draws a picture of the free city of Dajla celebrating Independence day, after all the exiled Saharawis have returned home. Dajla is Western Sahara’s second most important city. It is in the south along the Atlantic coast and it has beautiful beaches that at the present are a tourist attraction, besides a fishing source. Saharawi people deserve to live peaceful there and celebrate their own territory. The intention of the song is to offer an alternative to the current repression and create a different image full of dignity and happiness through the free expression of the Saharawi identity, that’s totally opposed to the real situation. I have never been there myself.

The lyrics of this song describe the sound of the dune’s movements caused by the wind. This is known as “the sand singing.” It also talks of lost things. For example, in past times of battles or the old caravans, water could be found in this region. It was part of the life of the original nomad populations. All of this was reduced to sand due over the passage of time, like it had been there never , in the same way that some stories are hidden and never appear on the media. This song features Xavi Lozano a great woodwind performer who plays a flute called the “mohoceño”.

It is about the need and importance of the water. Maybe, in the places where water abounds most people are not concerned about the but in the areas where water is lacking, water is a dream. Keep in mind that in the desert the riverbeds are there, but dry. This song could be understood as an oneiric song

It relates a tale of the migratory routes that depart from sub­-Saharan Africa and go through the desert to arrive at the European border in Morocco. That is the place where high numbers of the African migrant population assemble. They wait there on their journey to Europe but the fences stop them. They spend a lot of time living at that spot without the basics standards of living. But we can apply these lyrics to many kinds of migration, ever hounded by many dangers, with a landscape that is impassible.

It is a memory of a trip that I made a few years ago across the desert to Mauritania. The song describes the desert’s beauty in all its facets. Not only the landscape, but the people you can find in different areas. The desert can be a home, as it is for many nomadic populations. They have developed a resistance to its extreme conditions. But the desert can also be, a way to go back home.

This song is a tribute to the role of women in the building of the exiled Saharawi society and the tasks they do as the Saharawi revolution’s guard. The women are a blessing for many struggles.

It is about Western Sahara’s inalienable territorial integrity. “Mani” is a form of denial in Hassaniya (our Arabic dialect). In this way I try to clarify the limits of my identity as a Saharawi, although I have not seen many places of my homeland. The song features the Malian blues guitar master Samba Touré and I am very proud of this collaboration.

It is about the generational change­over in the constant struggle for my people’s freedom. At present this is assumed by the youth through the intifadas (struggles) that every day happen in the Occupied Territories.

This song is a protest against all the kinds of walls that there are in the world because they are a cruel infringement on human rights. And it is a clear reference to the largest sand wall in the world that Morocco built to divide the Western Sahara in order to prevent the return of the Saharawi refugees. This song also is a reflection on all the metaphoric walls that are a part of our society. For example, the prejudices that divide the people, like racism and intolerance.

Aziza Brahim’s album Abbar el Hamada is out now through Glitterbeat. Read our review here. She plays at the Royal Albert Hall’s Elgar Room on 26 April 2016, and will perform at WOMAD on 29 July. Tour dates and further information can be found here.