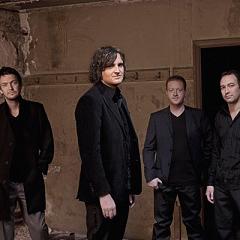 Starsailor are back. That’s a statement that might have caused more excitement back in 2002 than it does seven years on.But they’re a band that have inspired respect from luminaries such as Ronnie Wood and Phil Spector. They must be doing right, surely?

To find out what that might be, we returned to the scene where the crime began, the Social in Little Portland Street. Here it was that James Walsh and his merry men (or some of them) began their careers.
Walsh remembers it well. “It was about a 20 minute gig, quite a short little set”, he begins in measured tones, “but even back then we were playing Alcoholic, Good Souls, Lullaby and Fever. That was the catalyst for us. I remember we were supporting a band called Birdie, and I remember Martin, Jeff and Barrie James Oldham were down there for an NME review. It was quite nervewracking, and we had to cram on to the little stage down there. The other notable thing about the gig was that the drummer (Ben Byrne) couldn’t make it because he was managing an off licence at the time, and he couldn’t get the time off work! So the first Starsailor gig, where we got the NME review and got signed and everything, the drummer wasn’t there!”

Did Byrne have trouble getting back in to the band? “No, he was invited back into the fold, but we always tease him about it, like “if you were there maybe we wouldn’t have got that great review and might not have been signed!”. Yeah, we give him a hard time for that.”

Turning to the new album, their fourth, and Walsh seems happy with All The Plans. “We spent a long time writing songs for it. We recorded about 25 demos, and then approached Steve Osborne. We started off in Real World studios in Bath, but it was too sterile for us and too clinical. We did four or five weeks in there, but we only got one track done that we were happy with. We’d been doing demos in this place called the Doghouse in Henley-On-Thames though, we had a really good time there, so we thought maybe we should go back there and see how it works out. It was the right decision, we felt more at home and it was more natural.”

Starsailor: Tell Me It’s Not Over, from the album All The Plans

There were a couple of changes to the sound. “I think we were too conscious of making the third album sound different sonically. We needed to make sure it was a surprise and a departure, but on this record, we thought ‘Sod that, let’s do what comes naturally and write how we’ve always written, with guitar and piano’. That’s our audience, they’re the people that love us, and we owed it to them to be Starsailor again!”

That doesn’t mean they’re too predictable – and All The Plans, for all its natural approach, has some unexpected sounds. “I think the key thing was getting the songs strong enough”, says Walsh, “writing in that acoustic way. Then certain songs suited a different dressing up, and The Thames was one of those where we automatically added a rockabilly feel, and were really pleased with how it came out.”

The lyrics to Boy In Waiting imply Walsh was thinking of himself, over in LA about to start an album – something he denies. “I didn’t really have that in mind to be honest, the song’s more of a third person thing about a young director trying to make it in Hollywood.” He sips his beer and ponders. “There are parallels with us though. But it is about a young director, getting that praise and recognition initially, but then sitting and twiddling his thumbs. There are echoes of that in our career!”

They’re often lumped in with the likes of Keane and Coldplay. Do Starsailor feel misunderstood? “It can be frustrating,” Walsh admits. “The frustrating thing for me is that we’ve fallen between two stools almost. If we were totally accepted by the Keane, Coldplay and Travis audience we’d be absolutely massive! I’d be quite happy about that, if their fans went out and bought our album, but equally we’re not quite accepted in the Doves, Elbow and Arcade Fire cooler scene either. We’re totally in the middle, which frustrates me more than anything else!”

“We’re totally in the middle, which frustrates me more than anything else!” – Starsailor’s James Walsh laments how his band have fallen between the likes of Keane and Elbow

So, Starsailor are middling. Middle of the road. And they don’t mind, says Walsh, because their fans have stayed loyal. “We’re really grateful to our fans, they’re really loyal. And they’re the people that keep you going, the ones that have remained constant rather than dipping in and out.”

All The Plans adds another illustrious name to the list of Starsailor collaborators – Ronnie Wood. What was it like to work with a Rolling Stone? “Brilliant”, says Walsh. “It was a bit of a dream come true really, they’re the things that really make you feel proud. With all the problems with Phil Spector, the fact that he wanted to work with us in the first place was a great honour, and Ronnie Wood taking the time out to get involved in this album, it brings a lot of pride and respect from our peers. People raise their eyebrows and say that’s interesting.”

The Spector experience is well documented, but was it a destructive one for the band? He considers. “We came out stronger I think. It was a strange experience, it was very difficult to work with him. He was on medication, and drifting in and out of consciousness almost.” They discarded a lot of material. “I think the biggest mark of respect we paid to him was if it was anybody else we would have parted company after the first couple of days,” says Walsh, “but we persevered with Phil for five or six weeks. We were constantly clinging to the notion that he might create something great out of this, and it took us a long time to realise that wasn’t going to happen. You trust someone like that on the amazing things they’ve done in the past, so that if their methods are strange they might be able to do something with it, but we kept hearing the songs back and it wasn’t working. The songs were a bit repetitive and a bit heavy sounding. You could hear we weren’t having a good time!”

With their time in LA, have Starsailor absorbed much of it into their lyrics, or does this album feel more British? “Definitely more British”, is the emphatic reply. “Although we’re really proud of the third album, if there was one mistake it was doing the whole thing in LA, as we were totally isolated and there’s no British influence there really. We almost came back with this finished record and had no idea where our audience was and what they would feel about it. This time we wanted to keep people more up to date, and we did little gigs here and there.”

Back to the music – and You Never Get What You Deserve. Another thinly veiled reference to the band? He shakes his head. “It’s not about one specific person, it’s a kind of a fallen idol story. Britney Spears, a damaged teenage queen. It’s a shame really. But in a weird way – part of the song was thinking about her and what she’s done, but in the same way it thought a lot about Matthew Jay, an artist we knew and played with many times. He recorded some great music. Nick Drake as well – these are people who leave a great body of work that deserves respect, but that never comes to them in their lifetime. That respect is what it’s about.”

Does Walsh feel extra responsibility as a band to lift people’s spirits in these difficult times?

“I guess we do, in a way. It’s escapism, when you’re at a gig, and it’s good to remember great music sometimes comes out of difficult times. I think there’s that survival gene that kicks in. Our position is just as precarious as anybody else’s, so we need to go that extra mile with concerts and albums and things to make sure that we keep our place. That passion and determination needs to come through as well. That’s why it’s so difficult. The second album isn’t as good as the first album because it’s all laid out for you, but now I think we’re past that and we’ve got the hunger back.”

His conviction is assured. Movin’ On Up is playing on the club system – it seems suddenly apt, given Walsh’s confidence about Starsailor’s rebirth.