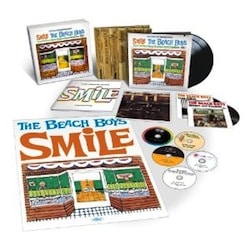 No album in popular music history rivals The Beach Boys’ famously abandoned 1967 album Smile in terms of mystery or speculation, and now, 44 years later, we’ve finally got a more complete version of the album than any collector or bootlegger could have hoped for. Planned as the follow-up to 1966’s Pet Sounds, Smile was abandoned when Brian Wilson began displaying serious signs of depression and paranoia, often credited as the dark and disturbing, but oft overlooked, downside of experimentation with LSD. Wilson’s increasingly erratic behaviour in the studio and the overall weirdness of the material and lyrics are often cited as further cause for dissent among his band mates (most notably, Mike Love, who famously accused Wilson and lyricist Van Dyke Parks of “fucking with the formula” that had made The Beach Boys so successful).

Smile is certainly the most famous unreleased album of all time, and it has long been a source of constant searching for dedicated bootleggers poring over hours of tape and studio banter, splicing together versions from incomplete recordings and hypothesising about the album’s final would-be track listing (what of the missing section of the “Elements” suite, for instance). Add to this the now obviously untrue, but somehow credible, rumour that Wilson destroyed a large portion of the master tapes (as displayed dramatically in 2000’s made-for-TV movie, The Beach Boys: An American Family), and you’ve got a confounding mess of lore and legend to sort through before you can even begin to make sense of what’s really important here. The music itself is as much a part of the mystery as anything surrounding its creation. But all that fans and hyper-speculative collectors could do was guess, really, until Brian Wilson assembled a band to re-record Smile in its entirety in 2004, reigniting interest and giving diehard fans a new blueprint from which to work.

The Smile Sessions, released through EMI, collects an absolutely astounding amount of material, from the complete album sequence spliced together by Brian Wilson – taking on a fitting role as perhaps the most fanatical of bootleggers along with a complete disc’s worth of alternate takes on Good Vibrations (25 versions in all) and enough madcap studio banter to occupy most of a manic weekend. Here, for the first time, the serious collector can experience the most complete possible view of Smile and its creation through the massive box set (which includes five CDs, two 45s, and a double LP on 180-gram audiophile vinyl, along with a beautifully bound book). But, for most Beach Boys fans, the two-disc version suffices quite nicely, comprised of the final album itself, along with a bonus disc of highlights from the sessions.

Hearing Smile in its entirety is a trip unlike any other; there’s a sense of intense melancholy in Wilson’s soundscapes, a feeling of deep remorse about modern life (something at which he hinted on Pet Sounds with tunes like I Just Wasn’t Made For These Times), but there’s also an undeniable feeling of childlike playfulness, of wonder, of the excitement of a frontier crossed with a loved one, of candy bars, of the Wild West, of surfing. And to hear the album coupled with even a small bit of the behind-the-scenes action makes it even more of a wonder to behold. Consider the meticulous structuring and restructuring of Good Vibrations, for instance, or the weird, druggy studio chatter collected in “Psycodelic Sounds” in which Wilson claims to be stuck inside the piano, “between C and C sharp,” and the rest of the gang tries comically to rescue him.

There’s a moment in recording a demo for Our Prayer, the album’s haunting, wordless acapella opener, when Wilson asks, “You guys feeling the acid yet?” Certainly, the LSD and its eventual effect on Brian Wilson’s mental health casts a certain dark pall over Smile, giving it a weightier, more brooding undertone than its name suggests, and it’s incredible that the same drug that helped in part to launch the psychedelic rock revolution of the late ’60s, causing musicians to crank up the volume, smash their guitar amps, and set things on fire, played a major role in causing Wilson to retreat so far into himself, and to create such disjointed, paranoid pocket symphonies. Given the meticulous craftsmanship and attention to detail evident throughout Smile, it’s no wonder the man broke down. Perfection is a heavy load to bear, and the intellectual, musical, and emotional dexterity needed to pull such lush and complicated sounds from one’s head and commit them to tape whilst relying on a cast of unbelievers and fighting the effects of heavy LSD experimentation must have been staggering.

The album proper opens with the brief and beautiful preamble of Our Prayer and Gee, before launching into the riotous Heroes And Villains, which bounds and roils -here a slide whistle, there a baroque harpsichord through a microcosmic look at the album’s sound; boisterous pop and theatrical playfulness are juxtaposed with introspective longing and quiet disconcertedness. All the while, the classic Beach Boys harmonies are present, keeping things relatively grounded amid the swelling, unpredictable nature of the instrumentation.

Do You Like Worms (Roll Plymouth Rock) performs a similar trick, sounding carnival-esque and darkly tribal, while still conveying a sense of unbridled enthusiasm for discovery. Perhaps nowhere on the album is this dichotomy so obvious and startling as on Cabinessence, which tells an embittered tale of Manifest Destiny and westward progress in terms of a quaint and affecting love story, and a “home on the range”. Surf’s Up appears here for the first time with Wilson’s complete 1966 vocal accompanying the original backing tapes (and it’s supplemented by a stunning solo rendition, just Wilson’s vocal and a swirling piano) to present something new and bracing, even to the most dedicated of collectors.

Good Vibrations is a doctoral thesis in and of itself, presented here in mind-spinning variation, here a western, there a whimsical ballad, there again a psychedelic rock song. It’s also an oddball on the album, and the only track here to see major release at the time of its creation. Its haunting Theremin accompaniment is as much at the heart of the Beach Boys mythos as is the surf-pop sound of early hits like Surfin’ USA or Little Deuce Coupe. Good Vibrations is arguably a more or less straightforward pop song in the midst of heady experimentalism, but it shows the scope of Wilson’s genius in miniature, encapsulating a range of emotions and sounds arguably unmatched by anything Wilson’s peers were coming up with at the time.

It’s impossible not to wonder whether, if it had been released as planned in 1967, Smile could have made the same indelible mark on popular music history that The Beatles‘ Sgt. Pepper’s did. One has to wonder if Smile might have been regarded as the greatest album of its decade, or perhaps even of all time (as some lists rank Sgt. Pepper’s as being), and furthermore, one has to ask what the alternative course of popular music history may indeed have looked like had Smile been given its chance to affect other artists working at the time. Who knows? It’s entirely possible that the album would, indeed, have been dismissed as too weird for a mass audience, as too square for the hippies, as too cerebral for dancing. But in hearing it in its glorious entirety, Smile does make an indelible mark 44 years too late; hearing it now, it’s somehow evident that Brian Wilson’s genius is still ahead of its time, and everyone else has got some catching up to do. Even at this late date, Smile undeniably deserves its rightful place among the greatest achievements in the history of recorded sound.

The Smile Sessions is available in various physical and digital formats 31st October 2011 through EMI.