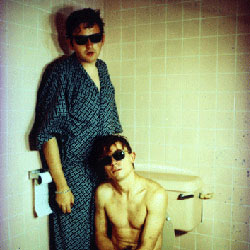 When it is suggested that the album is, at times, a little frightening, Furze is caught slightly unawares and admits that the album has its dark times, too.

“There’s a fear in it. The lyrics go into the lows, the emotional lows. Dominos has a sinister undertone to it. It’s a big anthemic song, but it’s also being honest about who we are. The way that we’re primal and almost pathetic at times. To realise that we act like this, that we’re able to act in such an awful, weak way. The fear is admitting that you can be that person. You are that person.”
So is the album about one girl in particular, or are the band’s trials and tribulations spread evenly among Britain’s female population?

“Me and Milo had both came out of long relationships before the record started. But there were lots of girls knocking about. Milo joked that he could call every song a different girl’s name. But the album’s not just about loving women. It’s bigger than just girls. It’s about everything; loving life, drugs, sex, partying every aspect of life.” So, A Brief History Of Life, then? We agree that wouldn’t have made for such a great album title.

The album’s diary-like escapades in the name of love coupled with Furze’s seemingly idealistic outlook suggest a band with old-fashioned romantic intentions. “We’re passionate people. But yeah, we are romantic. Although the girls, not to sound crass, fall like Dominos around us, we both eventually want to have, y’know, a chicken farm and horses and some beautiful blonde. At this point, I can’t see it happening for a while.” He does though counteract the (it has to be said) crassness: “But I think when we’re in a good situation with a girl, we do try to be as romantic as possible.”

Despite all that, this is an album with a human heart, and it feels a little like Furze and Cordell may be putting their laddish endeavours behind them. “Well, me and Milo, we’re 28 and 29 and this record couldn’t have come to us at any other time in our lives. I mean, I’ve told a million girls I loved them, but I’ve never meant it. But this is when things get exciting. Now, we’re looking for the real deal.” All groupies beware…

There’s no better translation of love to music than A Brief History Of Love’s crowning moment, Velvet. “It’s our favourite. It seems like a well-rounded song. Its chords are simple; they have a unity to them. Lyrically, it doesn’t beat around the bush. Still, when I play it live, it moves me every time I sing it. The lyrics ‘I see the end of what I’ve become… no promises, I wont go falling in love’… It’s a hard thing to say every night.”

Talking of things that are hard to put up with, how’s the famously treacherous rock star lifestyle treating the band? “It’s a very insular existence. You get to a point and it’s constantly about you, talking about yourself. It’s dangerous, always getting inside your head, and there are no people telling you that you’re wrong.”

Is it hard to stay humble? “It’s hard to keep perspective. You have to keep saying, ‘Chill out, you’ll be fine’. You have to say that a lot. You could easily go down a tangent where you completely lose all concept of reality and rational thinking. Then throw in the schedules as well. I was talking to Kele (Okereke) from Bloc Party, and we were just chatting in a bar, and he was saying, ‘You think you got it tough now’. It’s like, every second something is going on, and we’re so tired. It’s not surprising some people lose it.”

“Every artist feels like they live in alternate lifestyle, and there’s the self-destructive, tortured artist in all of us.” – The Big Pink’s Robbie Furze

But, there are some things that every man can relate to. “I always find that when I come home to my dog – I mean he hardly knows who I am anymore – but that completely grounds me.” The tiredness in Furze’s voice is obvious, but so is his endearingly genuine nature. “Yeah, me and Milo both have dogs, they’re so important to us.”

Furze, though, is determined to live out this incredible life, and is aware of the creativity meets rebellion meets self-destruction path that so many walk down. “I think living in an alternate environment, it’s definitely what we’re about. We don’t feel that we exist in a normal situation. Every artist feels like they live in alternate lifestyle, and there’s the self-destructive, tortured artist in all of us.”

He continues, almost with a sense of guilty confession. “But we’ve been through stages of self-destruction, with drugs and partying and stuff; and there’s an element of just wanting to get out of it. Everyone has that, but being creative pulls you back in. It’s a whirlwind, of being pulled and pushed in your own head.”

For all its subtle romanticism, A Brief History Of Love is at its best when it thunders down the highway like a young Jim Stark on the run from the cops. Oh, and let’s not forget about the beautiful blonde in the passenger seat. Furze ends the conversation talking about rebellion and shooting from the hip. “Yeah, we don’t give a fuck. We do it our way and if you don’t like it you can fuck off. We’ve always been like that. We’ve always had that punk attitude. If you don’t like us it’s not going bring us down, we just carry on whatever. We existed before anyone gave a shit and we’ll exist when they stop giving a shit.”

GO BACK…Read Part 1 of this interview