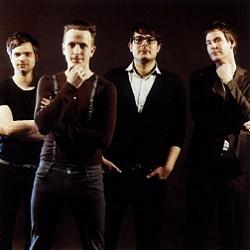 We still think of the Futureheads as a young band.

Yet as they arrive on the brink of the release of their third album, the quartet have had to keep their heads above water the hard way. The fall-out from previous album News & Tributes led to their split from the 679 label, the band choosing to go it alone.
And if the mood of vocalist Jaff is anything to go by in our chat, it’s the best thing they could possibly have done. The excitable Mackem is chirping at the reaction to their comeback single The Beginning Of The Twist, and thinking about the way forward with album This Is Not The World.

“We’re still buzzing because people couldn’t have gone for it any more. We got to the B-list on Radio 1 and then moved on from that, and a lot more people have heard it than might have done. We decided we’d go out for a while and come back with a bang, which is a bit worrying in some respects! Lyrically The Beginning Of The Twist could be about that, but in a sense it’s also about us doing a label.”

Jaff is enjoying the greater control the group has, but recognises the experienced input they continued to get. “We’re not noticing that much of a difference in a sense, because we’re working with people who have 40 years of experience, and obviously we haven’t done anything! We run the label together.”

“We’re not noticing that much of a difference in a sense, because we’re working with people who have40 years of experience” – Jaff enjoys the Futureheads’ new-found autonomy.

He talks with a wide-eyed enthusiasm about their sessions with Youth, producer of This Is Not The World. “We rehearsed for fifteen days, and recorded for twenty-one – we learned a real lot from him.”

Recording took place a long way from Sunderland – in Andalusia, in fact. “It was pretty amazing”, enthuses Jaff, “the later Close Encounter films were done there as it was cheaper, with all this beautiful scenery and stuff. We were in a guest house down the road, and a typical day would be with us driving up to the studio, rehearsing, having some breakfast, doing the singing, then having our tea, and then on to doing the overdub! Then that was the song done and we would listen to it until it was finished.”

He continues. “There was a proper, old school excitement about it, and we really got into the flow, you know? We were starting with a song a day, then it became two and finally three, we were really buzzing!”

All of which is a far cry from the aftermath of News & Tributes, though Jaff is still matter-of-fact when discussing how the band felt at the time. “We were pretty exhausted, cos we did News & Tributes and went straight back on the road, which was hard. With that album we made it in Scarborough in winter. That explains maybe why the last album had a black cover, and this time it’s orangey-red!”

“That explains maybe why the last album had a black cover, and this time it’s orangey-red!” – Jaff notes the new-found warmth of the Futureheads’ third album

In fact, it’s hard to keep Jaff from talking from anything but their Spanish sojourn. “In Spain you get these amazing vegetables grown by the mountains, so you’re eating those rather that something from a greenhouse in Brixton! I don’t want to sound like a hippy, but it was really amazing with the nature, even if it was raining and we couldn’t go out of the house.”

Clearly their environment helped the recording process. “We wrote loads of different songs there – we wrote a song about standing stones, some lyrics that were really dipping into our surroundings, then there was a song about a girl who had a radio for a heart (current single Radio Heart). We were focussing on lyrics that had the boredom of everyday life, but the chorus would be ‘Right, we’re going out, let’s make something!'”

Jaff feels the band have progressed musically too. “Definitely, I think this is a lot faster than what we were doing before, it’s less jerky and stop-starty. Now it rocks and makes loads of noise, we’re shouting our heads off! We don’t want people to think we’re an old band – I mean I’m only twenty-five – and we wanted to make a record that’s young. The second album’s broadened our horizons, but with this one we wanted to make it.”

The band are in for a busy summer. “We’re doing Glastonbury and V, and we’re doing quite a lot of the smaller festivals which I really like. I want to do some European festivals as well. As well as that, Barry’s getting married on the day of T in The Park, so we can’t do that, obviously!”

On a more serious note, he’s aware of the band’s desire to be in for the long haul. “I don’t mean to sound cynical, but there’s lots of amateurish music being broadcast at the moment, a lot of trendy music that won’t stay the course. You can take the plaudits now but hopefully in 20 years’ time people will look back, like they’re doing now with Gang Of Four and XTC and bands like that, and they’ll say the same things about us that they’ve said about those bands.”

Our interview wouldn’t be complete without a mention of the band’s beloved football team, who at the time of talking are on the brink of sealing their position in the Premiership. Why, Sunderland of course… “I really like them at the moment, and won’t have a bad word said about Roy Keane, he’s really turned it around for us in the last few weeks!”

At which point it’s time for some bullish pro-Sunderland emoting, and the feeling becomes clear that the band and the football team are perhaps enjoying parallel lives at the moment, having hauled themselves well clear of relegation.

The Futureheads MP3s or CDs

The Futureheads on Spotify