This Music Made Me: Austra

by MusicOMH
published: 16 Jan 2017 in This Music Made Me
Tweet

Katie Stelmanis’s third album as Austra, Future Politics, is arguably her most fully realised yet. Full of pop anthems carried by their creator’s striking, powerful yet fragile vocals, it marries hope for the future with a confidence in music making that brings its message to front and centre.

The Canadian calls for radical hope and “a commitment to replace the approaching dystopia. Not just hope in the future, but the idea that everyone is required to help write it, and the boundaries of what it can look like are both fascinating and endless. It’s not about ‘being political,’ it’s about reaching beyond boundaries, in every single field.”

Ahead of the sparse, intoxicating record’s release, Katie mined her music memory for the albums that have influenced her most, for Austra’s This Music Made Me…

When I was in high school I had a really limited exposure to any music that wasn’t classical.

My friends listened to really boring music that I wasn’t interested in and I didn’t feel the need to look for anything else. I moved out when I was 18 years old and my first roommate was really into industrial music and punk. She thought that because The Fragile had these really pretty piano parts that I would like it and made me listen to it a few different times.

At first I didn’t understand it, but one day it just clicked and this record became my obsession. I started writing electronic music on the computer and would put a really cheap distortion on everything to try and emulate the sounds from this record. I don’t think I was entirely successful but even so this music proved extremely influential. 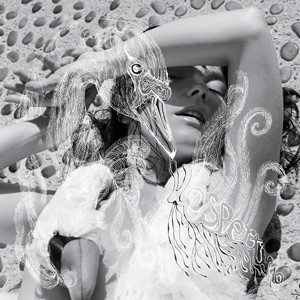 I was introduced to Björk’s music around the same time as Nine Inch Nails and was equally enthralled.

I started working at a café when I was just out of high school and one of the girls there was a huge fan and would always play her records. I didn’t really understand it but as is the case with most music and my brain I did eventually grow to love it.

The album in particular remains my favourite. I think I spent around a year while still living at my parents house listening to the song Aurora on repeat every single night before I went to sleep.

This is a relatively new discovery for me but I feel like it deserves to be in this list because it influenced my last record so heavily.

I saw them play at a festival in Europe somewhere, it was a really small one with only a few bands and they played a couple bands after we did. I hadn’t listened to them before but saw the entire show and was completely floored by their performance.

I haven’t felt that in a really long time and immediately went to download all of their records, this one I decided is my favourite.

When I was in high school I listened to this album almost every day. Before I started listening to Björk in the evenings, I would put this CD on my diskman and listen to it almost every night through all of high school while falling asleep.

I’d usually only make it through the first four or five songs so I’m really not sure what’s at the end of it, but I can safely safe that Che Gelida Manina put me to bed almost every day. The humming chorus as well was always a favourite.

Puccini’s lyrical style of writing and his habit of having the accompanying orchestra mimic the voice has been hugely influential on me and my own song writing, I always imagine writing an aria when I write a song, or at least that was the case until quite recently.

This was my first exposure to electro and euro-style dance music. When I was first coming of age in Toronto, The Knife felt like a secret that only some of us knew about and some of us liked.

It’s so hard to feel that now with anything because everything is so saturated online, but in the beginning this music really felt like something special. There was a party in Toronto called Vazaleen that was this queer punk party that attracted people from all different scenes in the city. It was to this day probably the best party I’ve ever been to and I feel really lucky that I got to experience it.

The guy who started it, Will Munro, used to book tons of electro bands like Peaches and also even Nina Hagan one year. He would play The Knife at every party and that must have been how I discovered it.

I was pretty bored by most of the music my friends in high school listened to but I really loved Carole King.

To me this record is an example of such perfect songwriting, traditional songwriting, which is something I’ve never really tried too hard to do until recently.

When I was still performing under my own name as Katie Stelmanis I covered the song Natural Woman which was fun because I was so averse to writing in a traditional way, being able to perform such a well-constructed pop song actually felt quite liberating.

Radiohead was pretty much the only “band” I listened to in high school.

I was so disinterested in popular music at that time but thought Radiohead was something very special. I remember going to England with my grandmother and copying all of our relatives CDs to tape while we were visiting them in York. I brought then home and listened to Paranoid Android on repeat for months.

I think I liked it because I was really into choirs, and Thom Yorke is an ex-choir boy, which was really obvious to me.

Tegan and Sara – The Con

I discovered Tegan and Sara in highschool when I was about 17 years old. I was questioning my own sexuality and these guys became my pop stars, I loved them and their music simultaneously.

Aside from being lesbian teen idols they are both really excellent song writers and producers. The Con is my favourite of their albums, and the production and also very specific vocal layering was super influential for me in my own writing.

When I put out my first record, Feel It Break, I decided I wanted to make an album that was like The Con meets Deep Cuts, I don’t think anyone ever picked up on those influences but to me it’s quite obvious.

One of my other first roommates introduced me to Nina Simone, someone who I believe to be one of the greatest artists of all time.

Her vocal delivery is unparalleled, I can’t think of any other artist capable of conveying such deep truth with such simple melodies. The song Sinnerman is one of my favourites, especially the breakdown in the middle with the two-chord piano solo. That simple and sparse moment was for me one of the most influential musical moments I have ever heard.

Simone started as a classical pianist and I feel that is quite obvious in her playing, though she plays without any pretention at all and just pure, raw, emotion.

Austra’s new album Future Politics is out on 20 January 2017 through Domino. Tour dates and further information can be found here.