This Music Made Me: Wrangler’s Stephen Mallinder

by musicOMH
published: 3 Oct 2014 in This Music Made Me
Tweet 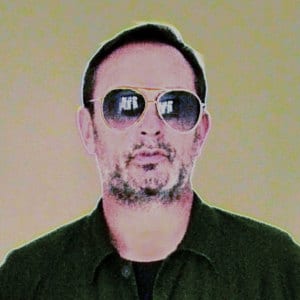 Cabaret Voltaire co-founder Dr Stephen Mallinder is this autumn setting about a batch of UK dates with new outfit Wrangler, whose debut album LA Spark was released earlier in 2014.

Following the hugely influential Cabaret Voltaire’s dissolution in the mid-’90s, Mallinder relocated to Australia and involved himself in a number of projects as musician and producer, notably Shaun Ryder‘s solo album. In Wrangler, he teams up with Benge of The Maths and Phil Winter of Tunng, and the album features guests including harpist Serafina Steer.

Given his extensive history of music making, we presumed Mallinder would have an extensive record collection to match. Thus it proved, and into it he gamely delved for the latest instalment of musicOMH’s This Music Made Me series, in which established artists share their thoughts on the albums that influenced them most… 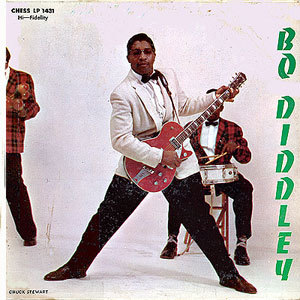 Bo Diddley was my first real music love. I was about nine years old when I became smitten by a series of old double-A sided 7-inches that he did with Chuck Berry that were in a relative’s collection of vinyl.

Chuck I could take or leave but Bo was the man. He had a square guitar that he built himself and made the most awesome rhythm chops. I wrote my doctoral thesis on rhythm and Bo’s railroad rhythms, and the clave beat, were a trigger for the ideas of music and movement.

Although Kraftwerk’s progression, fine-tuning and body of work has come to represent how electronic music evolved it was this album perhaps that captured those early days and a major early Cabs influences.

It was certainly more brutal and driving than anything else and significantly predated the sentiments of punk by a good 5 years. There was a minimalism and importantly a rhythmic drive which I appreciated at the time, much of the Tangerine Dream type of Teutonic music was a bit too head, this was more body.

I saw Michael Rother play at the Barbican a couple of years ago when he reinterpreted the Neu work as Hallogallo, it was a bit of a pilgrimage on my part. 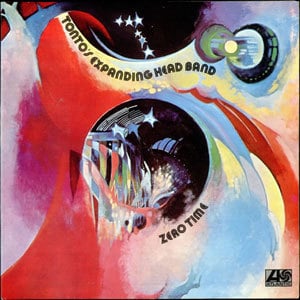 I have to be honest this hasn’t dated for me and I still play Timewhys and Cybernaut in DJ sets. I was introduced to it about 1973 by a friend Dave Bower who was a mad glam-meets-hippy guitarist who jammed a few times with the Cabs. I found it so exotic and peculiar but sonically fascinating.

TONTO stood for The Original New Timbral Orchestra – which was, I believe, the world’s first polyphonic analogue synth.

Malcolm Cecil and Margouleff who were Tonto’s were famous as programmers and producers specifically for Stevie Wonder, who was one of the first people I ever saw play live in 1970, Stevie used them and their technology to make Talking Book and Innervisions so they were ubercool in my eyes. 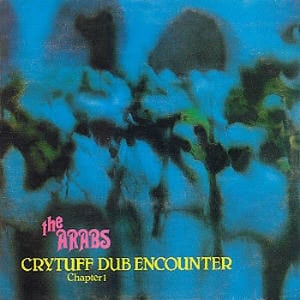 We’d always been into Jamaican rhythms – Richard and I met at a reggae and soul club called the Ark when we were about 14 years old. Around the mid-late seventies we used to frequent some of the illegal blues parties in Hanover Square in Sheffield.

It was a memorable cultural shift because, although suspicious of a group white kids, the guys who ran the parties were cool and once established we were there for the sounds all was good. It was a major eye-opener to see these amazing handmade wardrobe sized cabinets pumping out trouser-flapping bass frequencies.

Dub taught us so much about sonics – not just frequencies, bottom-end and the power of volume – but also the idea of space, what was left out being as important as what was there. King Tubby started the love of delay but this album began a series which map out dub for the next few years. 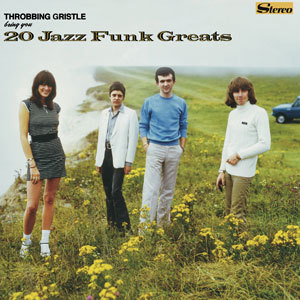 D.O.A Third Annual Report, which came out a bit earlier, and 20 Jazz Funk Greats, seem to represent up TG at their most potent. I think it is important to acknowledge how influential TG were at this time.

In a world dominated by guitars and punk affectations they presented an alternative dimension in music, sound, and approach. Four individuals who took on specific parts and had particular identities (that became very evident in post-TG adventures in Psychic TV, Coil and Chris & Cosey) but they came together as a powerful whole here.

These releases show TG at their most effective – when they were being thought provoking, challenging, outrageous, clever and mischievous. Brilliant cover of 20 Jazz Funk Greats, that could be unpicked to open up a whole series of messages, inferences and signs. It’s also got Hot On The Heels of Love, still a timeless piece of electronic disco. 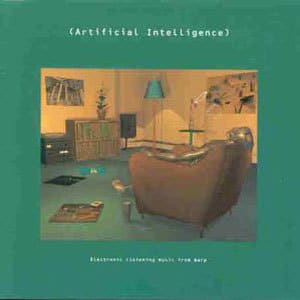 I was talking with Phil from Wrangler about what it means to try and compile lists of favourite albums. It begs the question how do we define an album and what is its purpose? It has massively shifted from the original concept of a collection of songs to market an artist to today where, in a download culture, the idea of an album is perhaps meaningless as we simply itemise tracks and compile our own collections and playlists.

The role of the curator, at festivals, and in compiling albums has been fundamental in this evolution. Warp’s Artificial Intelligence series sprang to mind as it captured the early ’90s electronic zeitgeist. Not only did it offer a fresh angle for electronica – a chill out mindset for everyone who’d been partying pretty hard but also a platform for a recent phenomena of bedroom producers who perhaps weren’t cooked enough to make a whole album. Some classic Autechre, Richard James and Alex Patterson tracks in there. 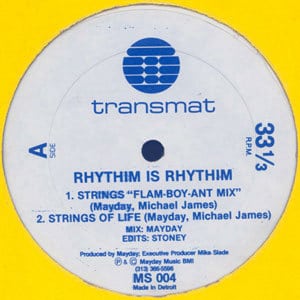 With the complexity of what constitutes an album in mind, this 12 inch on Transmat is as long as an album but simply an exploration of the Strings Of Life track. An unquestionable classic piece of music.

When I first heard this I think I stopped breathing for about a two minutes and today it still makes all the hairs on the back of my neck stand up. 909 maxed out, riffs galore, fragmented, broken, bent and twisted. The biggest honour was for Derrick to do a couple of mixes for us (Keep On), I can take that with me till the end.

We should scream for what Detroit has brought to the world in terms of music and now it’s a busted post-industrial city. Shame on capitalism and its soulless greed.

I realise that it would be cooler and perhaps more appropriate to select some classic Gil Scott-Heron, Moving Targets, or Reflections, or talk about his potent work in B-Movie, The Revolution Will Not Be Televised, Black History / The World.

All totally brilliant – the 13minute live version of The Bottle, with Brian Jackson is fucking awesome – but I think his last album with Richard Russell is about a lyrical angry man with so much to say right till the moment he went.

Making music can be cruel as we age. GSH produced a final album with intensity, honesty and fearless fear. Me and the Devil … shit yeah! 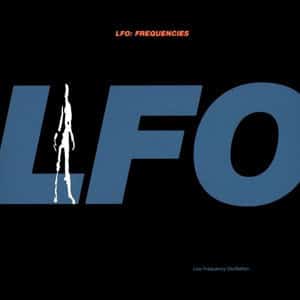 LFO – LFO (from the album Frequencies)

This was a quantum shift which took everyone by surprise. I remember hearing this over a sound system for the first time at the Occasions in Sheffield when Parrott played it, must have been a Jive Turkey night.

Having been to blues parties it was a clear extension of this – electronic music made with bass sound systems in mind, a wash of bottom-end with rising riffs and simple vocoded voice signatures. Like much great music it was uncomplicated, almost primal but importantly applied the technology of the time to the greatest effect.

Head-turning electronic music that was made by a couple of lads from Leeds and drew everyone’s gaze to the north of England: Warp, Nightmares, Sweet Excorcist – interesting times for Yorkshire as the north rose again from council estates and the ashes of a broken industry. 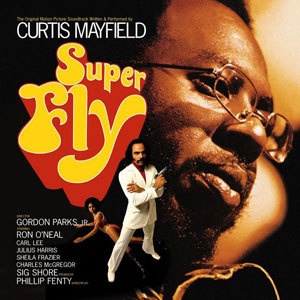 Well-known growling singer and Sheffield émigré, Pete Hope (The Box, White Trash etc), and myself were both very big Curtis Mayfield fans. I think deep down we both wanted to have his beautiful falsetto voice, sense of righteousness and really just be that cool. But Pete was from Hertfordshire and I was from Yorkshire so it was never going to happen.

Again this seems to illustrate the variable thing that is ‘an album’; soundtracks seem to form a high percentage of all time lists. It seems as though artists become liberated when their music has a vehicle to carry it and it positions the musician in a wider context. I think for Curtis it was just all his worlds aligning – music, messages, ideology, and cool ’70s iconography.

Just from the perspective of track selection it has some of his most identifiable tunes – Pusherman, Freddie’s Dead, Superfly … right where’s me white suit? 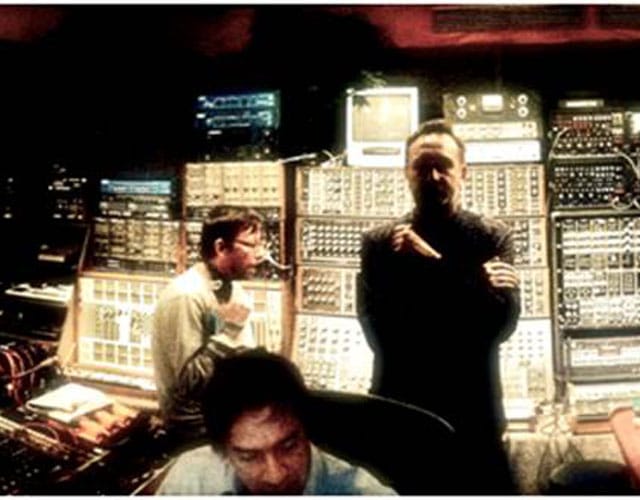 Wrangler’s album LA Spark is out now through MemeTune.