This Music Made Me: Stornoway

by musicOMH
published: 21 Apr 2015 in This Music Made Me
Tweet 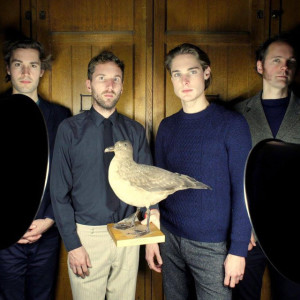 “The great skua (Stercorarius skua) is a large seabird, it is sometimes known by the name bonxie. The flight is direct and powerful. Due to its size, aggressive nature and fierce defence of its nest, the great skua has little to fear from other predators. Bonxies are at the top of the food chain. They are certainly a powerful, intimidating and ruthless predator.”

Stornoway‘s third album, out this month, is called Bonxie, after the Hebridean seabird’s Shetland name, this being derived from the Norse. It transpires on closer examination that there are birds all over the album, with the calls of 20 different species woven into the songs; Bonxie could well be an album to birdwatch to. But while powerful, intimidating and ruthless are words that well describe the titular skua, they can hardly be apposite for the band.

Formed not in the Hebrides but rather in Cowley, Oxfordshire, in 2005 by singer and ornithologist Dr Brian Briggs, keyboard player Jon Ouin and rhythm section Oli and Rob Steadman, Stornoway were, in 2009, the first unsigned band to play on Later… with Jools Holland. A year later, signed to celebrated label 4AD, they released their debut album Beachcomber’s Windowsill, which spawned the single Zorbing. The follow-up Tales From Terra Firma followed in 2013 and made it in to the UK Top 30 album chart.

With Bonxie taking flight and live dates slated for the spring and summer, Jon Ouin delves into his record collection in search of the albums that have influenced him most. This, then, is Stornoway’s This Music Made Me… 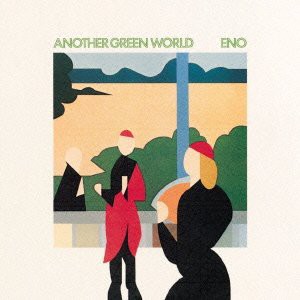 This was my introduction to Brian Eno’s music, and it’s the album I always return to.

So much has been written about it – it’s a classic after all – but it still feels fresh and strange. To me it’s almost like a series of soundtrack miniatures which are complete in themselves. By turns it’s glacial (Spirits Drifting), abrasive (Sky Saw), regal (The Big Ship), wistful (the title track) and occasionally a bit dippy (I’ll Come Running). I love the way that in most of the tracks he makes patterns and then breaks the cycle before you get too comfortable – something is always shifting.

His near-mythical recording techniques and chicanery seem to have really started in earnest here. It’s a very ‘painterly’ way of making music which appeals to me. Besides all the pioneering synth and proto-ambient stuff, there’s some fluid bass-playing on it too (Over Fire Island). How could an album which features Brian Eno, John Cale and Robert Fripp not be great? 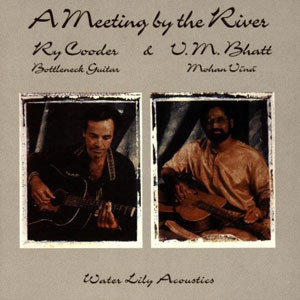 I’m a massive fan of Ry Cooder, and I’ve always loved the sound of slide guitar, but this collaboration with Vishwa Mohan Bhatt takes the biscuit.

VM Bhatt, an incredible musician from Jaipur in Rajasthan, plays the mohan veena, which is basically a 20 string lap steel guitar, and Cooder responds with his bluesy open-tuned acoustic and create something entirely new. 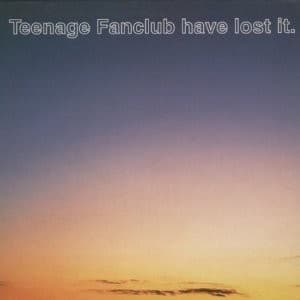 This is a four-track EP of acoustic takes of songs from previous albums, and I was about 13 or 14 when I got it, I think.

I remember having the flu and listening to Welsh radio in bed and they played heard the first track, Don’t Look Back (a version of a song from Grand Prix which I think came out around the same time) which I liked instantly, but the DJ didn’t say who the artist was… So it was a while before I worked out who Teenage Fanclub were, but I was kind of hooked from then.

As well as having that Teenage Fanclub trademark vocal harmony, this EP is also pretty eccentric: it includes lots of messing around with samplers between songs, banjos, and an audible sigh of relief on lighting a ciggie… According to our singer Brian, TFC were the subject of the first conversation we ever had (so perhaps if I’d said “who the hell are they?” I would now be working in a shoe shop or something). As we were fans of the Fanclub, their music led us to work with erstwhile producer/engineer/all-round genius George Shilling. 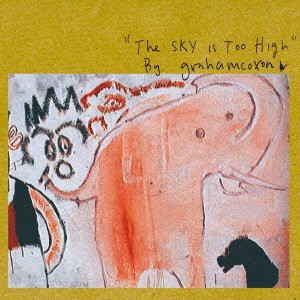 Graham Coxon – The Sky Is Too High

This was the first of Graham Coxon’s solo albums (all of which I own – do I get a badge?), and I think it was a stop-gap before Blur’s album 13.

The words didn’t mean so much to me (apart from hearing him wish he could bring “Nick Drake back to life” in a song and thinking “I wonder who he is?”…), but I still like the way it moves to from scratchy vulnerability to something approaching pent-up anger!

It doesn’t try to be perfect – it seems more like a diary than anything. It was definitely a huge inspiration for me with my own early attempts at making music on my first Fostex 4-track as a teenager. 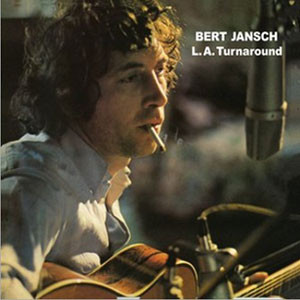 I had the amazing privilege of seeing Bert Jansch play in Bristol years ago, which is also where I found a second-hand vinyl copy of this album, so it really reminds me of being in the city.

The songs on this album are more fleshed out than his earlier music, and it sounds more like a band effort, with other collaborators contributing pedal steel, violin and mandolin.

There are some pure gold instrumental tracks which I love, like Chambertin and Lady Nothing. 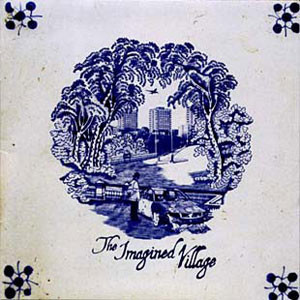 This was a collective project founded by Afro Celts’ Simon Emerson a few years ago – they explore English roots, and twist traditional folksongs into new and varied musical shapes.

I remember seeing them perform at Wychwood a few years back (it was one of the first festivals that Stornoway played at) and it’s up there as one of my favourite ever festival performances, and this album reminds me of that time. There was an enormous (and slightly eerie) projection of Benjamin Zephaniah’s head, reciting his version of Tam Lyn. Cold Haily Rainy Night is the real standout for me. 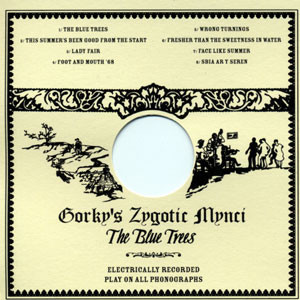 We’ve actually just returned from the amazing Laugharne Festival in Wales, where we were honoured to be supporting ex-Gorky’s man Richard James. Brian’s more of an ardent fan than me (I think they inspired him to move to Wales!).

This is an record I was slightly addicted to as a student. Put simply I just really love the sound of their voices. It’s a very dreamy and pure, and maybe reigns in some of their more out-there freakout moments that you normally get on their other albums.

“Fresher than the sweetness in water” says it all really. 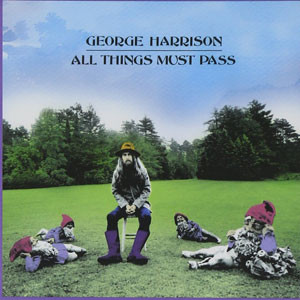 George Harrison – All Things Must Pass

I have to include at least one Beatles album, as for me (and I’m sure it’s the same for many musicians), they were a childhood musical obsession which overshadowed everything else for years.

I’d say this is my favourite solo Beatle record. It’s a joyous thing – the sound of a creative dam being unblocked! I imagine it’s a triple album as George was forced to keep so much material under his hat when the latter Beatles albums were being made.

I think he was latterly a bit unconvinced by the Phil Spector ‘Wall of Sound’ treatment, but this is what I love about it! It’s pretty murky, and sometimes his voice is in danger of being lost in the sea of overdubs… But when the music is as soulful as this it just needs to sound huge. 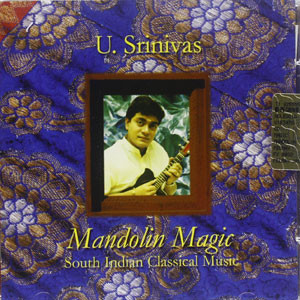 Just connecting with the previous one, I remember reading an interview with George Harrison just before he died in which he recommended this mandolin prodigy from South India called U Srinivas. Thanks George!

This album is a series of classical Carnatic pieces re-interpreted on mandolin, with violin and percussive accompaniment. I think the mandolin is amped, so it allows for more sustain, which suits a sound which is very focused on the grace notes and ornaments.

It’s a phenomenal sound, and it doesn’t really sound like any mandolin playing I’ve heard before or since, and eventually inspired me to try taking up the instrument a few years ago. 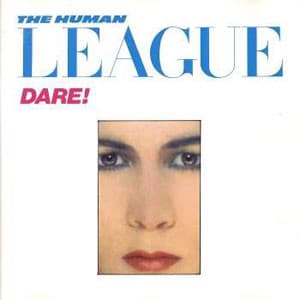 This was a real ‘grower’ of an album for me (as in, over a period of 15 years!). Initially I confess I found Human League a bit of an ’80s joke when I was a teenager. There’s a hell of a lot of inventiveness going on in Dare though – it’s so easy to forget that no-one else had really made this type of synthetic pop music before.

There’s such a massive variety of synth textures and sounds, and those huge singles (Love Action and Don’t You Want Me are kind of perfect). A lot of the melodies and progressions are plain odd, and the production is light and wispy; often the lyrics pull the other way and are pretty sinister.

I didn’t listen to this for quite a while, but then a few years ago I found a second-hand tape copy and gave it to our drummer Rob for his birthday.

Stornoway’s third album Bonxie is out now through Cooking Vinyl. Tour dates and further information can be found here.