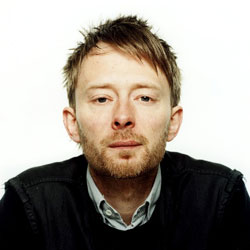 Pitchfork harrumphed that it wasn’t authorized, and that Baker had authored works on Kylie and the late Steve Irwin. Who was he to comment on Thom Yorke?

Well and good, but in the absence of a book written or authorized by Yorke, Baker’s effort at least fills a gap in the market and gives him the chance to write about one of the most influential musicians currently making music, as he explains below.
There’s always a tricky balance to maintain when writing an unofficial biography. On the one hand you don’t want to be unnecessarily intrusive. With somebody like Thom, who’s maintained his privacy for such a long time, I didn’t want to start rummaging through dustbins or phoning up his mum and dad.

But the other extreme is to provide no new information other than that which is available on-line and in the various magazine articles that have been written about him.

Despite this it was a lot of fun to write, not least on the basic level of speaking to so many people who’ve worked with him and finding out more about the songs. For example, I didn’t know that Thom’s old university band, Headless Chickens, used to play High And Dry.

It did make me wonder why Radiohead never put that, and another very old song The Bends, on their debut album Pablo Honey. Maybe they thought How Do You and Lurgee were better. It was reassuring, too, to find out how fondly pretty much everybody who’s ever worked with the band still speaks of them.

The session musicians who provided The National Anthem with its screech-jazz moments still seemed blown away, years later, by how polite the band were and by the fact that they gave them a nice dinner afterwards. This might say as much about the day-to-day life of being a session musician as it does about Radiohead but they also gave me some great quotes about what being in the studio with Thom and Jonny is like.

The most interesting thing about writing the book, though, was seeing Thom through the eyes of people who knew him at different points in his life and seeing how he’s changed. As a child and as a teenager he was incredibly ambitious. One person I spoke to said that when he met Thom at a summer music camp, when he was in his mid-teens, he was already dressing and acting like he was going to be famous.

But, not long after he wrote Creep, it seems like he changed. He met Rachel, his long-term girlfriend (and now the mother of his two children) and lost a little of the insecurity that had fuelled his ambition and songs like Creep. The only problem was that Creep fixed him permanently in the public eye as a kind of hall-of-mirrors caricature of the person he’d been at one of his worst moments in 1988.

The years since then have been a continuous battle against letting Radiohead, and his own songwriting, become trapped by anybody else’s perception of them. This means that it’s unlikely he’ll ever write an autobiography, or authorise some supposedly authoritative and definitive final biography.

For those of us who are interested in one of Britain’s greatest songwriters, then, books like this will have to do.