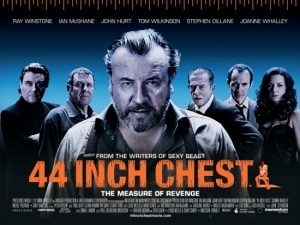 directed by
Malcolm Venville
The Brit gangster flick has always dealt in masculinities. From Dicky Attenboroughs puckish violence to Bob Hoskins territorial violence, to Michael Caines urbane artfulness to Moran and Fletchers chancing – our white urban male heroes are fleshed out in these mythological figures. So it seems fitting that as we enter a new decade, along comes a film that signals the genres first attempt at updating of our visions of national gangster manhood, bringing to the table a post-Loaded, semi-serious rendering of the New Man.

44 Inch Chests intellectual remit would suggest a sharp cast, and so we get John Hurt, Ian MacShane, Tom Wilkinson – all grappling with the tendentious script with varying degrees of success. In the central role is the heaving pusillanimous bulk of Ray Winstone as Colin Diamond, cast as the struggling emotional site of new manhood, with more ambiguity than he had in Sexy Beast and shedding more tears than he did in The Proposition.

After an explosive bust-up with his cheating wife Liz (played by an excellent Jo Whalley), Colin arrives at an emotional crossroads at which he is forced to consider a path of torture or forgiveness of his sexual rival. In keeping with the films weighty pretensions, the direction is extremely stagey. Set-pieces and high visual drama are eschewed, the majority of the action taking place in a single location of an East London hideout. Indeed the films central debt is not to any previous film but to the rapid-fire psychologism of the playwright Harold Pinter, whose work remains one of the historical bases for the British gangster genre. The film frequently alludes to Pinters The Birthday Party and struggles to mimic it, a way distant second, never coming close to the cold stolid sense of threat, or the ragged mental dissolution that Pinter achieved in his stagework.

Another similarity to Pinter is the undercurrent of misogyny. But where Pinter uses misogyny as impenetrable psychosocial horror, 44 Inch Chest is largely unaware of its own complicity. At the same time as Liz is acknowledged as a peripheral tool of male fantasy, appearing as she does in her husbands hallucinations as a mute sex-doll, we as viewers are invited to gain our own libidinous enjoyment from a repeated Peckinpah-esque slo-mo of Liz being smashed through a plate-glass window.

If we are willing to overlook that hypocrisy then the manner in which the film addresses domestic violence is myopic at best. The notion that it might be intrinsically wrong for our central everyman to batter a woman is largely left unquestioned, passed over in favour of the process of a mans forgiveness, both for himself and his sexual rival. Emotion as violence is remaindered as a truth about manhood, a bracketed act. John Hurt is left to spit cartoon bile about bitches and cement the idea that while actively hating women is palpably outmoded, beating them is sometimes unavoidable.

The territorialism of films like the Long Good Friday, once confined to organisational buffeting, is here an internalised emotional territory. But its a narrowly male fight, and for all its probing 44 Inch Chest fails to contemplate that at the beginning of thinking about ourselves as men might be a requirement to think of ourselves as men in relation to women. And its in this light, of ultimately stunted sexuality, that one giant leap for gangster flicks is one baby step for mankind.