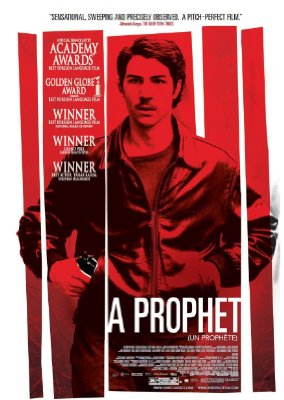 directed by
Jacques Audiard
French cinemas style and swagger has captivated and influenced American filmmakers and audiences since the explosion of the nouvelle vague in the 1960s. But even ice-cool Gallic auteurs like Truffaut, Godard and Chabrol would struggle to match the international excitement surrounding Parisian Jacques Audiard after his prison-set drama, A Prophet, recently took best film at both Cannes and London film festivals.

Ironically, Audiard is a director far more influenced by Hollywood than by his forebears. A devotee of genre films, his previous two features, Read My Lips and The Beat That My Heart Skipped were small-scale crime thrillers par excellence. It can only be hoped that this, his fifth feature, will give him the attention his astonishing work deserves, and give him the American film he obviously craves.

A Prophet is an engrossing, sometimes labyrinthine, prison drama set against a backdrop of racial tension and a country unsure of its relationship with its own people. Malik, an Arab teenager is sent to prison for seven years. He is soon forced to carry out a bloody murder of a fellow prisoner, but uses the prestige that comeswith the crime to slowly work his way up to become a key player in the Corsican mafia – something that does not go unnoticed by his fellow Muslim inmates.

Audiard has pulled off a neat trick here – managing to say much about Frances social problems while keeping the viewer engrossed in a dense, heart-in-your-mouth thriller. From Maliks first moments in the superbly-realised prison to his first taste of freedom, you are acutely aware that the system, and the country, are corrupt and not fit for purpose, although there is no liberal soapboxing here. Audiard points no fingers at the characters, even the hardiest criminals, and he gives all of them complex moral mazes to navigate. Actions are never born out of one-dimensional evilness, and he drags every last ounce of feeling out of his actors and out of the audience. It is an emotionally draining film, but a vital one.

Key to the films success is two of the central performances. Using a majority cast of unknown or untrained actors, Audiard has turned up a star in Tahar Rahim, who plays Malik. Running a gamut of emotions – from gauche young inmate, through the terror of his first execution to the cocky mafia general, Rahim has that effortlessly magnetic quality that the stars of the future emit. Audiard old-boy Niels Arestrup turns in a majestic performance as Corsican mafia boss Csar Luciani, at once Brandos terrifying Godfather and a desperate old man who knows he will never leave jail.

Audiard has taken a huge step up from his last film – both in ambition and in style. The prison life is immaculately detailed – the portrayl of a humdrum existence punctuated by vicious bouts of violence is as good as Bressons A Man Escaped, and the director has widened his scope to include a plethora of subplots and supporting characters – although Malik continues to be our link with each, onscreen for 98% of the film. The film also pulls off a number of incredible coup-de-cinemas, including a superb sequence where Malik is shown how to conceal a razorblade under his tongue, and a climactic action sequence as visceral and exciting as anything in the Bourne series.

There are a few false notes – Maliks murder victim appears to him in ghostly visitations, which, while stylishly handled, feel as if they need more context – as does the oblique prophet reference (which feels more like a hangover to a more supernatural previous draft than anything else). Similarly, some of the supporting characters are given unneeded Trainspotting-style title cards, which momentarily pulls the viewer out of the immersive experience. Yet these are minor quibbles about a film that deserves to be watched again and again. Audiard has fashioned a supreme thriller with a social conscience. And how often can you say that of Hollywood?