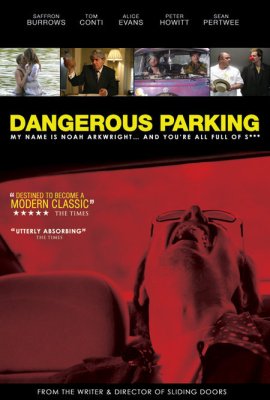 directed by
Peter Howitt
Dangerous Parking is, much like its unreliable narrator and addled protagonist Noah Arkwright (Peter Howitt), all over the place. Like an epic, it opens in medias res – except that drunken, drugged-up Noah is fleeing a church AA meeting rather than heroically facing up to his demons and from then on, the film comprises an increasingly claustrophobic cycle of flashbacks and flashforwards, fantasies and hallucinations, anecdotes and evasions. So convoluted is the film’s approach to storytelling that you won’t need mind-altering substances to appreciate this character’s sense of disorientation, as Noah struggles to find his centre and “truth, the best drug on the market”.

Noah is sipping, snorting, and screwing his way from one self-destructive scenario to another, until eventually, after the intervention of his new acquaintance Kirstin (Rachael Stirling) and his best friend Ray (Sean Pertwee), and after warnings from a doctor that his excesses will soon kill him, he dries out in a rehab clinic where the regime of heavy medication leads him to lose track of time. We feel similarly for in this most anachronous of narratives, we already know that Kirstin is going to die suddenly some time in the future, we do not yet know of the bizarre squid incident that that has already led Ray to give up the booze on the sly, and it is now a while since we first met Noah’s guardian angel, the cellist Clare Mattheson (Saffron Burrows), who will marry and have two children with him, even though, at this moment in rehab, Noah has yet to meet or even hear of her himself. And we have a pretty good idea, too, that cancer, rather than drink and drugs, will turn out to be Noah’s real poison…

In Peter Howitt’s Dangerous Parking, Noah is not only played by the director, but is also a cult director himself, and one of the many reflexive games played by the film is the way that Noah, both as narrator and character, is always trying to re-direct his experiences to make them less shabby and more cinematic. In this way, Howitt’s film is able to go through all the clichd tropes of addiction, recovery and terminal illness while at the same time repeatedly subverting them. Even the final scenes, for all their carefully contrived pathos, end up being deconstructed by Noah’s self-effacing (and terminally paradoxical) voice-over, as though, to the very last and beyond, he is still struggling to negotiate an artistic compromise between illusion and reality.

This recurrent technique, whereby we are first manipulated into an emotional response to the images on screen, only then to be reminded that it is all just smoke and mirrors, runs the risk of alienating the viewer as does the rather unlikeable character of Noah, who for all his slippery elusiveness, is not at all lying when he calls himself “wanker”, “arsehole”, or worse. And yet death the one thing that cannot be evaded or denied is ultimately what grounds Dangerous Parking. That Stuart Browne, the author of the semi-autobiographical novel on which the film is based (and to whom the film is dedicated), actually did die of cancer in 1999 (before his book was published), is one truth that even Noah cannot simply undo or cut out, no matter how he may try to refashion it for our entertainment and his own aggrandisement.

In the end, Dangerous Parking is a tricky, self-conscious film that refuses to take the easy path to laughter or tears, and it is certainly the braver, and probably also the better, for it. The director of Sliding Doors has crafted a work that begins like a Trainspotting clone for the middle-aged generation, but ends closer to the spirit of Shallow Grave, preferring to expose its own narrative artifice than to offer viewers the reassurances of eleventh-hour redemption. Its flaw, though, is its length by the time it is all over, this overdose of visual exuberance and mercurial tale-telling has drifted from engaging to plain exhausting.