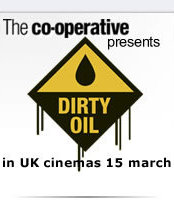 directed by
Leslie Iwerks
Dirty Oil is the third film to be distributed by The Co-operative and Dogwoof, whose partnership is designed to help socially conscious films reach mainstream cinema audiences. However, if youre expecting a BBC-style relatively well-balanced offering youre going to be woefully disappointed.

Since it is written and directed by the Oscar- and Emmy-nominated Leslie Iwerks (The Pixar Story, Recycled Life) and narrated by actress and environmentalist Neve Campbell (Scream, Panic), Dirty Oil can at least be applauded for being visually stunning and easy on the ear. Owing to the talking-head format of much of the content, Campbells input isnt overwhelming, but that only serves to endow it with more poignancy.

The raison d’tre of this piece is the growing concern around the exploitation of the tar sand oil reserves in the Canadian province of Alberta. Oil is a messy business at the best of times, but extracting it from tar sands creates substantially more pollutants and has an even more obvious impact on the surrounding landscape. The environmental and human costs are quite obvious, but the way in which theyre handled is enough to make even the most cynical hack raise an eyebrow.

The oil companies make vast revenues from this process and consequently so do the Canadian provincial and federal governments. With so much money at stake its inevitable that reports and concerns get brushed aside or explained away with an amount of spin that would make Tony Blair blush. Unfortunately the only surprise is, frankly, that anyone finds this surprising.

The points are all perfectly valid, but the way theyre put across is a little cloying at times and some of them are a little dubious. Admittedly we dont have data to make comparisons against what the situation was with regard to water cleanliness, base levels of disease amongst residents etc before exploitation of the tar sands began, but thats because things worked differently back in the 1940s not because of a big conspiracy.

Then we have the grey-haired environmentalist sitting infront of a slew of wind-turbines pleading, with a tear in his eye, about how if only we could all pull together like the Americans did under Roosevelt after Pearl Harbor. Throw in the worthy yet bullied doctor talking about cancer rates whilst being intercut with pictures of gravestones and you can see that this is clearly designed to make a sadly predictable pull on the heartstrings.

Its also easy to see why theres minimal input from oil firms and government agencies as from the title alone its plain that this was never going to be a non-partisan effort. They were never going to get a fair hearing, assuming they deserve one of course, and turkeys are not in the habit of voting for Christmas if they have any say in the matter.

All in all, whilst its horrifically one-sided and overly sentimental, it is definitely going to make you think. For all the interminable statistics and arguments that reach Jarndyce v. Jarndyce proportions there is one very important point. Is it dirty? Yes. Is there so much money at stake that people dont care? Yes. Can we do anything about it ourselves by reducing our own consumption rather than just blaming oil firms? Of course. Being reminded of that fact alone makes this worth seeing.