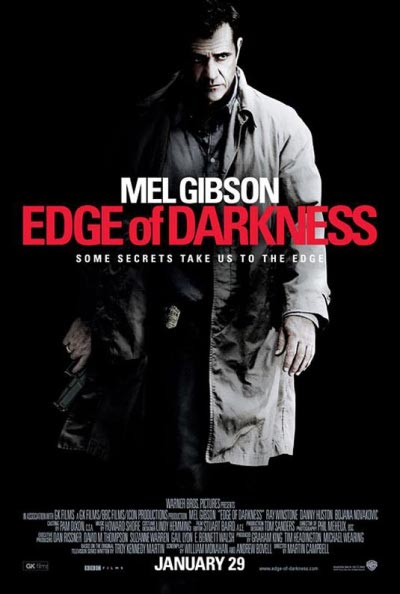 directed by
Martin Campbell
It cant be emphasised enough how groundbreaking and prestigious Troy Kennedy Martins 1985 TV series Edge Of Darkness was at the time. Emerging from a long line of quality British television drama as exemplified by immediate predecessors like the hugely popular John Le Carre adaptation Tinker, Tailor, Soldier, Spy, Edge Of Darkness (as directed by Martin Campbell) was a much bolder and more dynamic proposition.

Broodingly, cinematically epic in a way that television drama tended not to be in those days, it was a near-perfect fusion of thought with thrills: it shared a pedigree with Pakulas Parallax View and Coppolas The Conversation more than it did with anything previously encountered in British television. Anchored by a trio of stunning performances from Bob Peck, Joanne Whalley and Joe Don Baker (as well as Eric Claptons famously plaintive and tragic musical score), it managed to shine a stark light upon the encroaching forces of callous big business and governmental corruption at the heart of Thatchers Britain while being a rattling good yarn, full of twists and tension and often wrenchingly emotional turning points.

The shows themes (the domestic threat posed by those who control the still-mysterious and terrifying chimera of nuclear energy) were as ambitious as its treatment. Edge Of Darkness deservedly won a raft of BAFTAs and set a template for the intelligent political thriller that has rarely been deviated from since.

Almost 25 years later, Campbell returns to the territory of his first big break as director of Edge Of Darkness: Mark 2. Mel Gibson comes out of his enforced 5-year sabbatical to portray Pecks character Thomas (Ronald in the original) Craven, an ageing and world-weary cop who dotes on his adult daughter Emma (Bojana Novakovic). Emma comes home from her mysterious job working for a private nuclear energy firm bearing a deadly secret, but before this can be revealed, she is cold-bloodedly shotgunned on Cravens front porch, setting off a chain of events that will plunge her grieving father into a chaos of moral and political darkness with far-reaching consequences for the planet.

The film is, for quite a lot of its running time, surprisingly and pleasingly faithful to the tone if not the letter of the original. Necessary streamlining of the plot makes it a lot less dense and novelistic, but Campbell doesnt skimp on the details or the atmosphere. With its US setting (leafy Boston taking over from rainy Yorkshire) and hushed tone, the film could almost be one of those Alan J Pakula conspiracy thrillers from the 1970s. Plot details are revealed at an admirably even pace, and for once Gibson reigns in his patented psycho with a conscience act.

With his greying hair and deeply furrowed brow, Gibson seems to have aged decades since we saw him last, and more often than one might expect, he honours the material with his stillness. Of course, this being a star vehicle certain expectations must be met. And so its not long before hes tussling with a would-be assassin in a fight which destroys most of a small living room, or coldly pumping bullets into an oncoming car.

This wildly off-balance tone does the film a serious disservice and leaves it neither fish nor fowl. On the one hand we have a serious film which handles material weve (literally) seen before with admirable sincerity and rigour: on the other we have Mel Gibson battering bad guys in order to fulfil the expectations of a mainstream thriller audience. The tonal unevenness, coupled with a last-reel descent into pure macho-Hollywood silliness is all the more frustrating because there is a genuine intelligence at work within the film which is rarely allowed to breathe fully.

Ray Winstone portrays mysterious agent of what-we-dont-know-cant-hurt-us Darius Jedburgh as the polar opposite of the charismatic gentleman cowboy Joe Don Baker played in the original. Jedburgh turns up like a quiet ghost at various points in Cravens investigation to offer a little sage advice, a little crucial info and the odd cajoling witticism (almost in the same way Cravens dead daughter did in the TV series), but apart from periodically mumbling some wisdom at Craven, he really doesnt do very much (well, not until the end anyway).

Visually and stylistically Campbell has not been this good in years, and Phil Meheuxs subtle lighting gives the film that authentic 70s thriller feel. Even the most disturbing imagery in Edge of Darkness has a cold, poetic beauty to it. From the opening shot of black-clad bodies surfacing one by one on a picturesque lake at dawn, to the painstakingly slow reveal of a gunshot wound in a characters head, there are moments here that match the innovations and cinematic eye that the youthful Campbell brought to the table all those years ago. And yet, after all of this sterling work has been done, it finally stands there as mere window-dressing to another masochistic rage from Mad Mel, whose career to this point consists almost solely of going suddenly crazy while choking back tears on a mission of revenge.

Edge Of Darkness looks for a good while, like it may be ditching this template, but right on cue, about 20 minutes from the end, all the old Gibson cliches come roaring back at us, like a low-flying jet scattering a carefully-balanced house of cards.

The film is dedicated at the end to Troy Kennedy Martin, who sadly passed away last year. Its a shame that posterity will now not record what he made of this enterprise. One wonders if he would favour the ending, which puts the final nail in the movies credibility by sugar-coating the tragedy weve just witnessed with what can only be described as a quasi-religious glow. Martins Edge Of Darkness, let us not forget, ends with a shriek of unparalleled emotional pain.