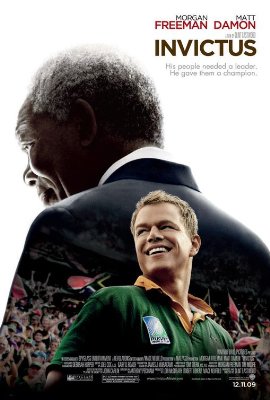 directed by
Clint Eastwood
Based on the novel by John Carlin, Invictus is set in South Africa during the first half of the 1990s. The film, directed by Clint Eastwood, chronicles the efforts of newly-elected president Nelson Mandela (Morgan Freeman) to unify his country through sports, in particular Rugby.

The only problem is that the national team, captained by Francois Piennar (Matt Damon), is a bit of a joke. In fact, when Mandela gets his unification idea, the team downright stinks. With their work cut out for him, backed by a little bit of inspiration from Mandela, Piennar and his team become determined to make it to the 1995 World Rugby Cup while helping Mandela lift his country above the crime and apartheid that still plagues it.

Ever since his 1992 Oscar-winning triumph Unforgiven pushed him into the realm of great American filmmakers, Eastwood has been on a pretty remarkable creative streak.Sure, there have been a fewbumps in the road, such as last years Changeling, 1999s True Crimeand 2002s Blood Work. More often than not though, the Man from Malpaso has been consistently turning outsolid, sometimes great,directorial effortsover the past two decades.

Invictus falls somewhere in between. While its a film from the 79-year old that keeps you entertained from start to finish, it’s also one that could have been so much more. The films debits certainly do not lie in the subject matter: the effort of a political prisoner-turned-president to unify a country torn apart by racism and crime through a second-rate national rugby team? Youd be hard-pressed to find better material to make an underdog story from. It’s also not the fault of the solid cast; led by two strong turns by Freeman and Damon (both handle the tricky South African accent very well) whose performances keep us engaged throughout.

The blame lies with Anthony Peckham’s screenplay and Eastwoods directing, both which get the work done but do so disappointingly. Plenty of material worth developing is hinted at: Mandelas family troubles, the struggle of Piennar to motivate his team and unite the fans, South Africas continuing troubles after Mandela takes office, etc. But thats it. Its brought up, but rarely developed or further examined. And if you are unfamiliar with the ins and outs of Rugby, you can also forget about getting an overview here (apparently, there was an explanation but the scene ended up on the cutting room floor). The well-shot finale is somewhat exciting, but I had no idea as to what the hell was going on.

Eastwoods directing takes the story competently from point A to B to C, but its done in such (forgive the expression) black-and-white terms that while the viewer might find themselves enjoying the movie as it plays out, theyll be hard pressed to remember anything memorable afterwards. One would expect this type of directing from the likes of a younger, newer filmmaker, but not one as seasoned as Eastwood. Then again, it has been said that a directors efforts can only be as good as the screenplay that they are given to work from.

Invictus certainly is no Changeling or Absolute Power, but then again its no Letters From Iwo Jimaor Million Dollar Baby. If youre looking for a rudimentary sports drama with nothing terribly deep or depressing attached to it for your holiday viewing, you could do far worse than this film. But if youre looking for an inspiring underdog tale with some meat on its storytelling bones, youd be advised to look someplace else.