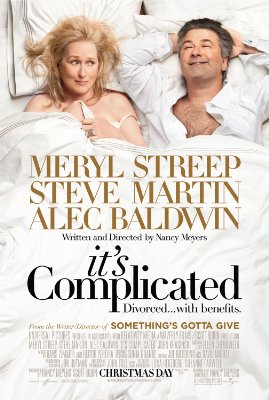 directed by
Nancy Meyers
The romantic comedy has a bad reputation that probably has more to do with the quality of recent examples of the genre than with the genre itself. With each week bringing a new clunker like The Ugly Truth or The Ghost of Girlfriends Past, it is no wonder that the genre is often looked on with disdain. It’s relieving that, thanks to a game cast of pros, It’s Complicated succeeds where others fail.

Meryl Streep stars as Jane, who after being divorced for 10 years becomes her remarried ex-husband’s (Alec Baldwin) mistress. At the same time she meets a sweet architect (Steve Martin) who is also interested in her, thus creating a classic screwball love triangle.

It’s Complicated is written, produced and directed by Nancy Meyers who cut her teeth as a screenwriter in the 1980s with such hits as Private Benjamin and Baby Boom before becoming a writer/director. She proudly works within the romantic comedy genre, but does something rare: she writes roles for adults. In such films as the remake of The Parent Trap, What Women Want and Something’s Gotta Give her leads are often in their late 30s, 40s or 50s.

Her films rely on familiar formulas and clichs, but in most cases, she finds real warmth, humour and truths within her characters. Unfortunately, her last film, The Holiday, went a little heavy on the cutesy stuff and was dismissed by many as a chick flick. When she’s at her best though, Meyers’ films usually dodge the much maligned chick flick moniker and play well for both genders.

It’s Complicated at times trades in obvious, even juvenile humour, but is a welcomed return to some of the sophistication and honesty that distinguished the wonderful Something’s Gotta Give. Scenes like Streep and Martin getting high and acting goofy at a party or a mishap involving male nudity and a web cam wouldn’t be out of place in a sitcom, but, given the calibre of the performers, these scenes play better than the material truly is.

The pleasures of this film come from watching these immensely talented actors jelling so well. Streep is well known for her dramatic talents (Doubt being the recent standout example), but in recent years she has revealed herself to be a fine comic actress as well. There’s a light touch and buoyancy to her performance, but Streep being Streep also finds ways to bring things to a realistic plane.

Over the last decade or so Baldwin has also reinvented himself as a fairly brilliant comic actor. Jack Donaghy, his inspired character in the show 30 Rock completed this transformation. Baldwin brings a lot of the Jack Donaghy persona into play here, but he adds more vulnerability and a more maniac energy. Baldwin has a rare and uncanny ability to take a line that on the page isn’t anything special and make it hilarious.

Martin is in his more low-key comedic persona, and, of late, it is the mode that works best for him. When Martin is appearing in lame slapstick like The Pink Panther it is easy to forget that he has capacity to be a charming leading man. He shares several very sweet, quiet scenes with Streep. The scenes with Baldwin are broader and score the bigger laughs, but Martin helps give the film a tenderness.

The rest of the cast are underdeveloped stock characters who don’t leave much of an impression. The one exception is John Krasinki, of the US Office as Streep’s son-in-law. His character isn’t any more developed than the rest of the supporting cast, but like the three leads his natural comic timing shines through, allowing him to steal some quick laughs.

It’s Complicated doesn’t break any new ground, nor is it a new classic of the genre, but it is a smart, funny film that has characters who approximate real human behaviour. Sadly, it has come to the point for the romantic comedy where this is no small praise.