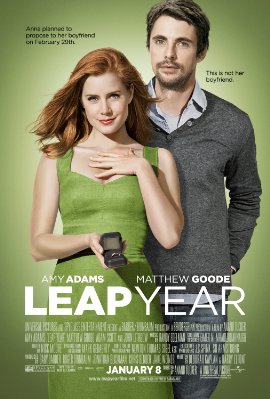 directed by
Anand Tucker
Leap Year is the latest in a seemingly endless stream of flat, unimaginative romantic comedies. The current state of the rom-com is dire enough to turn even the most romantic moviegoers off the genre entirely.

A film like Leap Year is so inconsequential it isn’t even really worth talking about at any great length. It just lies there on the screen, a bundle of repackaged cliches that is only watchable thanks to the lovingly photographed Irish countryside and considerable charms of its two leads, Amy Adams and Matthew Goode. Let’s give credit where it is due: Adams and Goode do have chemistry and do make us care, if only fleetingly, before the gears of the script rob the film of its potential.

The premise has Adams running off to Ireland to propose to her boyfriend who is in Dublin on business. We are told it is a long standing Irish tradition for women to propose on leap day. Thanks to a series of events that could only exist in a screenwriter’s head, Adams winds up getting a ride from pub owner Goode. Naturally, they bicker at first, but then slowly fall for each other.

There was a time when romantic comedies were effervescent and brimming with fast-paced, witty dialogue. Films like Bringing Up Baby or The Philadelphia Story are still as fresh today as they were 60 years ago. Somewhere along the way though that spark was lost and it only occasionally reappears in modern classics like When Harry Met Sally or Four Weddings and a Funeral.

A lot of people complain that they don’t like romantic comedies because they are predictable, but that really misses the point. Of course the two people that hate each other at the beginning of the film will fall in love by the end. Part of the reason we go to these films is for the comfort that love always prevails, if only for 90 minutes.

What distinguishes a romantic comedy is how it works within its formula. The problem with a lot of romantic comedies today is not only that they are borrowing the template from previous films, but the content too. The journey to the ending, the part of the film that needs to be unique and new, is being telegraphed from other, better films.

This is exactly what makes Leap Year so listless and dull. The plot is essentially a lift from 1934’s It Happened One Night, but it isn’t the plot that is the problem. There is not a single scene that hasn’t been in a film before. There’s even that oh-so-familiar scene where the two people who hate each other have to pose as a married couple because of some plot contrivance. This leads to them inevitably being forced to kiss each other and realize that – oh wait – that actually felt good. Can we please retire this scene?

The attempts at comedy are lame at best. Nearly everybody Adams meets in Ireland is a cute elderly person. Everyone spouts superstitions and bickers with each other about these superstitions. Screenwriters Harry Elfont and Deborah Kaplan don’t even attempt to make their characters anything more than broad caricatures of the way Americans think the Irish are supposed to act.

Elfont and Kaplan have never exactly been the most original writers, but at least in Can’t Hardly Wait and Josie and the Pussycats they had some playfulness and quirkiness along the fringes. There’s nothing remotely distinguishing in what they wrote here.

What is most offensive about the film is not only does it waste the talents of its leads, but of its director, Anand Tucker, who made such wonderful films as Shopgirl and Hilary and Jackie. Tucker is slumming it with this material and although he makes it look good, it is wasted effort. A polished turd is still a turd.