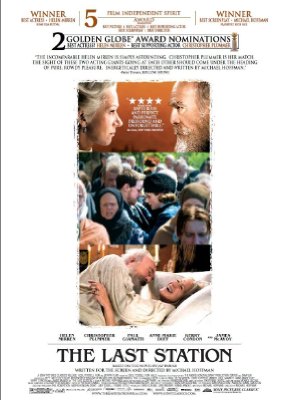 directed by
Michael Hoffman
The Last Station focuses on the tumultuous final months of Leo Tolstoys 82-year-old life, as full of drama as any of his great novels.

Director Michael Hoffman has adapted Jay Parinis novel, which blends fact and fiction in its depiction of Tolstoys (Christopher Plummer) stormy relationship with his wife Sofya (Helen Mirren), climaxing with him running away from her in the middle of the night and dying at a small isolated railway station.

These extraordinary events are seen through the eyes of Valentin Bulgakov (James McAvoy), a nave young disciple of Tolstoys utopian ideals who is recruited to be his private secretary by leading Tolstoyan Vladimir Chertkov (Paul Giamatti). But Chertkov wants Bulgakov to spy on the Tolstoys and report back to him, as he attempts to persuade the ailing author to change his will and leave the rights to his books to the community he has founded rather than his own family.

Bulgakov finds that his dream job while living in Tolstoys rural commune is far from what he imagined as he witnesses at close quarters the flawed humanity of his hero and gets caught up in the power struggle over his legacy between Sofya and Chertkov. In so doing, he undergoes a rite of passage as he falls in love with fellow communitarian Masha and is forced to make his own momentous life decisions.

The Last Station provides a fascinating insight into the domestic tribulations of one of the most publicly revered figures of his age. It offers a finely balanced portrait of a complicated love/hate marriage so that we can see both points of view equally. Tolstoy is a benevolent but vain figure fully aware of his international reputation, while the manipulative and demanding Sofya loathes his flattering followers who have shifted his priorities away from her and their children.

For a filmmaker best known for rom-coms like Soapdish, One Fine Day and A Midsummer Nights Dream, Hoffman has certainly entered new, darker territory here, in an impressively even-handed account of this battle of the sexes. He has done justice to a genuinely moving tragedy without lapsing into melodrama or sentimentality, even if the parallel younger love story seems thin in comparison.

He is aided by a convincing re-creation of the period by art director Andreas Olshausen and costume designer Monika Jacobs, while Sebastian Edschmids handsome cinematography and Sergey Yevtushenkos compelling music add much to the films texture.

However, it is the performances that are most memorable, specifically Christopher Plummer and Helen Mirren as the warring couple, both deservedly nominated for Oscars. Plummers long, silver-bearded Tolstoy, dressed in a peasants smock, resembles an Old Testament prophet. But though his Lear-like death has a Shakespearean grandeur, he also shows down-to-earth warmth and lusty humour. Mirren is at the peak of her powers in giving a Cleopatra-like performance as drama queen Sofya, whose over-the-top attention seeking may seem absurd but whose real passion for her husband one never doubts.

James McAvoy does well as Bulgakov, suggesting a sensitive idealist learning quickly about the realities of life, especially in the sexually liberated shape of Kerry Condons Masha, a truly free spirit looking forward to the feminism of the twentieth century. And Paul Giamattis Chertkov is a deliciously Machiavellian schemer who may well believe in promoting world brotherhood, but only if he can be in control, basking in the reflected glory of a far nobler soul.

Although this is a somewhat speculative view of historical events, The Last Station is a welcome contribution to marking the centenary of Tolstoys death. And, in a nice touch, the films closing credits are run alongside some archive footage of the great man himself.