by Helen Clarke
published: 14 May 2017 in London Gigs
Tweet 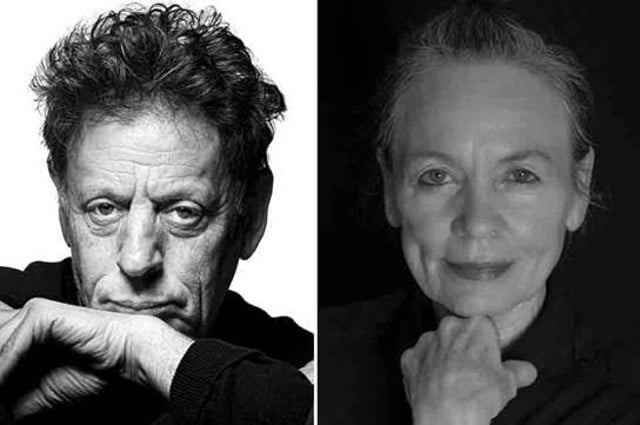 Philip Glass and Laurie Anderson, both pioneers and legends in their own right, and have been collaborating for years on live and recorded projects. Their latest project looks set to be their most exciting yet. First performed in 2015, their show at the Royal Festival Hall on Thursday 18 May will be the first time American Style is aired in the UK. A mixture of spoken performances and words from their friends Allen Ginsberg, Lou Reed and Leonard Cohen, among others, and will be peppered with Anderson’s visual work.

Penguin Cafe launch their new album, The Imperfect Sea, with a show at Omeara on Thursday 18 May. Theirs’ is a fascinating story, with this, relatively new incarnation, dropping the ‘Orchestra’ from their name as the mantle passed from father to son. This is their second album, and sees Arthur Jeffries assert his musical authority while honouring his late father Simon’s legacy. Now signed to Erased Tapes, their sound is predictably unpredictable, and the record is based on the idea of a penguin stranded on a desert island, struggling to adapt to its surroundings. It’s full of beautiful, fascinating compositions that will no doubt be a treat on the live stage.

If snarling garage rock with a pop sensibility sounds like your bag, it’s worth heading east to Oslo on Wednesday 17 May to catch Atlanta band The Coathangers. They’ve got a tongue in cheek brattishness which they convert into blistering punk energy on stage, with tracks like Don’t Touch My Shit and Shut The Fuck Up.  This is their 11th year, and they’ve already got five albums under their belt, and we can expect tracks from their next, upcoming record at this show.

The National have announced their seventh record, Sleep Well Beas, is set to be released by 4AD in September. There’s a huge world tour to go with it, including four, yes four, nights at Hammersmith Apollo on 25-28 October. Tickets go on sale on Friday 19 May.