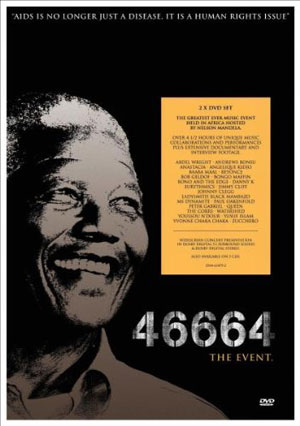 Charity concerts were once de rigeur among rock’s aristocracy, that is until a combination of “charidee” fatigue and cynicism at stars’ motives for taking part in such events began to set in.

So, while there is no doubting the aims of the whole 46664 AIDS awareness project (taking its name from Nelson Mandela’s old prison number), the prospect of an all-star concert for the campaign induced a certain late-’80s sense of deja vu, something that was reinforced by the prospect of a bill that included what’s left of Queen, his Holiness Saint Bono, the Eurythmics, Peter Gabriel and Bob Geldof.

And so it proved – although such events are virtually critic-proof (who, after all, wants to be seen to be decrying something that does such obvious good) in strictly musical terms this was strictly for the mums and dads, despite the token inclusion of such “happening” icons as Anastacia, Ms Dynamite, Beyonce, Paul Oakenfold and, er, The Corrs.

For much of the event an unctuous air of self-congratulation fairly oozes out of the television set. Only with Nelson Mandela’s speech does the real meaning of the occasion come through.

The event really takes flight, however, with the appearance of Baaba Maal, Angelique Kidjo, Johnny Clegg and Jimmy Cliff, with a sublime performance of Paul Simon’s Homeless by Ladysmith Black Mambazo stealing the show, creating a rare ocean of calm and contemplation in a sea of showbiz razzmatazz.

Queen may have their own obvious reasons for supporting AIDS awareness – they did after all lose their lead vocalist to the disease – but hearing (and seeing) Bohemian Rhapsody, We Will Rock You and We Are The Champions belted out at such an occasion is nothing short of bizarre.

Rather more meaningful are some of the extras to be found on the DVD, including a documentary about the true story of a Ugandan orphan who has lost his parents from Aids and footage from a project visit to Mothers 2 Mothers-2-Be and the Baphaumelele Childrens’ Home, which remind you that, whatever the reservations about such occasions, the urgency of the cause cannot be denied.

But if you really want to do your bit for AIDS awareness, and spare yourself a couple of hours of watching rock stars parading their consciences, my advice is to make a donation directly to 46664 at 46664.tiscali.com.