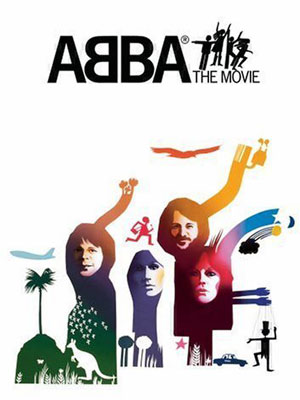 As we are dealing with ABBA, it should be immediately apparent that we are not faced with one of the most cutting edge pieces of film here. Yet it must be said that ABBA: The Movie stands apart from most films made by the world’s biggest bands over the years.

The premise is a fairly interesting one. Instead of a race against time for the band to get to their own concert, a device utilised in A Hard Day’s Night and Spiceworld (seems uncouth to mention the two in the same sentence) we have a DJ who is – against his own wishes – assigned to track down ABBA and glean an in-depth interview with them. As I say, it is a vaguely interesting idea, if only it weren’t for a subject matter who are so damned silly.

It all takes place over the course of the Scandinavians’ Australian tour of 1977, and this DJ, one Ashley Wallace, must overcome obstacle after obstacle in his quest to get access to the band. Most amusingly, he is confronted time and time again by Lou Carpenter from Neighbours (Tom Oliver), here playing an intolerable security guard (and later, an ABBA-hating taxi driver). I hate to spoil the ending for you all, as I’ve no doubt you’re on the edge of your seats, but there is a happy denouement.

The flimsy plotline is actually no more than filler between songs. About three-quarters of the entire movie is concert footage, with many songs shown in their entirety – and mostly unfamiliar numbers, that is, not on ABBA: Gold. These scenes reveal the smileyness of ABBA, and the fact they did actually have a good time before marriages split and the bitter break-up that was to come. It is also evident from seeing them performing in these huge venues, how absurdly popular they were. Frenzied crowd scenes are interspersed with snippets of produce from the ABBA merchandise empire selling like Immodium at a Madras Mardi Gras.

No doubt Australians were lured into ABBA worship by their ‘good beat, good rhythm and good lyrics’, not to mention they are ‘nice and clean’ and ‘look tidy’. These and more are amongst the inane snippets from Wallace’s interviews with the public.

There are two occasions when this film is very funny: one intentionally, one not. Firstly, there is a garish dream sequence when Wallace imagines himself frolicking in meadows with the band, the two girls draping themselves round him and the two men hanging on his every word. It is a wonderfully (and knowingly) kitsch addition to the film, and proves it is not taking itself at all seriously, which is good.

The second occasion of hilarity comes in several press conferences, when reporters from Australia’s tabloids delve into the ins and outs of Agnetha’s behind, for want of a better phrase. Her rump is one of the finest things Sweden has given the world, but Anni-Frid didn’t seem to think so and we get untactful close-ups of her rather grumpy face when this feature of her singing partner is brought up. Splendid.

Thankfully, the fact ABBA’s appearances in the movie are limited to on-stage, means they don’t have to act, a wise move sparing them inevitable humiliation. So ABBA: The Movie is actually quite an enjoyable watch, if not exactly profound. If its worthiness could ever be doubted, just remember that most hallow of ABBA mantras: Without a song or a dance, what are we?