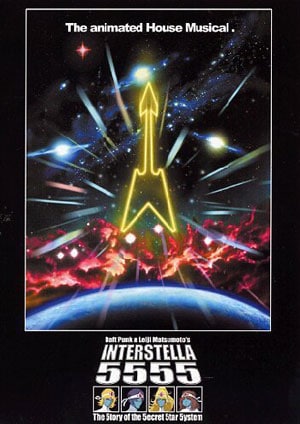 Daft Punk have always been about the complete package. From the moment that Da Funk’s insistent monotone bassline first caused havoc on the dancefloor and propelled the band into the major league, they have always paid close attention to every detail of their releases from their videos, to their sleeves, to how they present themselves.

The visual element has always loomed large in their work, especially in their videos (which have included walking, talking dogs and dancing skeletons), and their collaborations with some of the hottest directors around have always stuck in the mind.

When the time came to release their second studio album Discovery, they pulled out all the stops. Heroically expensive robot suits, incredible photo shoots, lush packaging and for the first single to be lifted from the album, One More Time, an anime (japanese animation) video directed by the legendary Leiji Matsumoto.

At the time rumours abounded that this was just the tip of the iceberg and for once the rumours were right. For now, a full two years since Discovery first baffled, infuriated and delighted critics in equal measure, we have Interstella 5555 or Discovery – The Movie.

The product of a meeting of minds between France and Japan, aka two of the most obtuse nations in existence, Interstella 5555 is everything you could have hoped for and everything you could have dreaded. First off, it helps if you liked Discovery. If its ’80s electro-pop overload left you cold then no amount of blue-skinned aliens getting funky will persuade you otherwise. Likewise, it’s a big plus if you’re familiar with the style and conventions of anime; otherwise you might as well just be watching CBBC with the sound down.

But assuming that you’re the sort of person who thought that Discovery was a soft focus, synth pop classic, and whose shelves are buckling under the weight of Dragonball Z DVDs, then you’re in for a treat. Once you’ve got used to the anime style, absurd plot, randomly moving mouths etc, Interstella 5555 really is a thing of beauty. The animation is, in its own way, gorgeous, whilst some of the drawings of the vast vistas of space are just stunning.

The plot is pretty much standard mental anime fare: blue-skinned alien pop band are kidnapped and pulled through space into our universe where an evil Svengali attempts to use them to complete his plans for universal domination.

So far, so bizarre. However, at the end of the day, the plot is irrelevant. Instead, what we have here is a superior slice of eye candy and fans of Discovery will find much to enjoy. As well as the movie, the DVD comes complete with all the sort of essential watch-once-and-forget-about features we’ve come to expect on this format, namely biographies, stills and other bits and pieces.

Interstella 5555 is definitely a must for Daft Punk completists. Whether there’s enough for the less devoted is another matter, and straight up fans of anime might do better to save their money for that Ulysses 31 boxset.