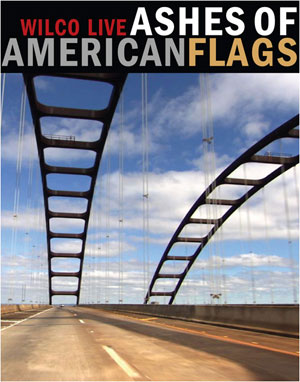 The spirit of rock and roll means a lot of things to a lot of people. For Wilco, the Chicago band who have progressed through alt country, pop, classic rock, and electronic noise, rock and roll is a state of mind as much as a philosophy of life.

Ashes Of American Flags, a concert film that details a Southern leg of Wilco’s 2008 American tour, focuses mainly on the group as they appear onstage. But a few short segments in between songs shed light on their philosophies and observations rather than their innerworkings as a touring band. Outside of the music, they are an insightful bunch who ruminate on topics such as the development of American culture and the history of pop music.

The band’s intellectual weight comes through in the cinematography and editing of the film as much as it does through Wilco’s music. Christoph Green, the director from singer Jeff Tweedy’s 2006 solo acoustic DVD Sunken Treasure: Live In The Pacific Northwest, is here joined behind the camera by Fugazi’s Brendan Canty. Green and Canty used several high definition cameras both on and offstage to brilliantly capture these performances: stage cams zoom in close to faces and instruments for an intimate feel while others sweep out for broad views of the venues and crowds.

The film editing – the mark of any great documentary – is spot on. Everything starts with a weary looking Tweedy donning a felt cowboy hat and brown leather jacket. Wilco kick in with a heartfelt rendition of Ashes Of American Flags, and only in the final moments of the song is it revealed that the band are playing to an empty room. It’s a marvellous technique that immediately shows Wilco as a dedicated band – they put as much stock into their sound checks as they do into their actual performances.

The sound mixing is also spectacular. The slightest guitar rumblings jump out, and lead guitarist Nels Cline’s solos soar majestically in the mix. A lot of footage rests on Cline’s guitar, and rightly so, since every song from the band’s catalogue becomes transformed with his playing. Wilco were together a decade before Cline joined, but his intense, virtuoistic playing here makes you wonder how the others ever got along without him.

Although Cline steals the spotlight, the band as a whole work together as a tight unit. Across 13 songs and 90 minutes (excluding the additional 30 minutes of bonus concert footage), there are no faltering beats or dropped notes. Glenn Kotche’s methodical yet experimental drumming locks in precisely with John Stirratt’s smooth bass runs, providing a rock-solid foundation for the others to play over. The level of musicianship onstage in these songs is staggering, and even when things are kept simple, there’s a glowing aura around the group, an intimacy and understanding that pervades their every move.

The non-concert footage included works just as well. Shots of American landscapes roll by as the band travel from New Orleans to Nashville to Washington DC. Stirratt comments on the development of smalltown America, lamenting the rise of Wal-Mart while cameras pan desolate parking lots and run-down cities.

In front of a country-style venue, Tweedy argues against a romanticized, purist view of popular folk music, noting that Hank Williams was as big a popstar back then as Madonna is today. Only one section – a quick summary of each band member’s personality, as if they were on a television dating show – faltered in terms of adding to the intensity of the film.

Ashes Of American Flags ultimately succeeds as a concert-oriented movie, much like Martin Scorsese’s 2008 documentary of The Rolling Stones, Shine A Light. Anyone looking for a behind-the-scenes take along the lines of Wilco’s black and white documentary I Am Trying To Break Your Heart will necessarily be disappointed by the lack of narrative. But Ashes Of American Flags stands as beautiful, monumental document of one of the strongest touring bands around today and is a must-have for any fan of the band.