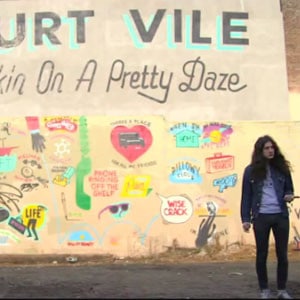 Kurt Vile has announced his return with details for his latest LP, Wakin On A Pretty Daze, the follow-up to his critically-acclaimed fourth album Smoke Ring For My Halo.

The Philadelphia singer-songwriter’s eagerly anticipated fifth solo effort, which was recorded with producer John Agnello in studios across north-east America, will be released via Matador on 8 April.

As well as the album announcement, Vile has offered up a download and video for the nine-minute album opener Wakin On A Pretty Day. The fascinating video (below) shows the time-lapse creation of the album artwork mural by artist Steve Powers, who found fame in the late 1990s for his graffiti under the name ESPO.

The album, which clocks in at 69 minutes, will be available on deluxe vinyl with removable wall art stickers, standard vinyl, CD and digital download. The pre-order for the physical edition is available now from the Matador Store and digitally from iTunes, with an exclusive bonus iTunes track.

Vile will also support the album release with his band The Violators at London’s Field Day in May, along with the following worldwide tour dates: