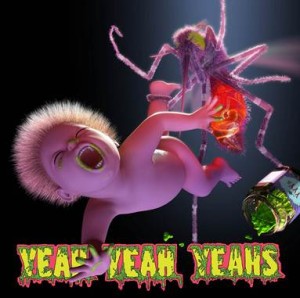 Yeah Yeah Yeahs have unveiled a second teaser clip ahead of their forthcoming fifth album Mosquito.

The video runs for an ultra brief 49 seconds and features the band performing a lovely dreamy number encircled by a strange kaleidoscopic effect on the screen. The video also provides a clear look at singer Karen O’s striking new image of platinum blonde hair.

The video follows last month’s preview clip which showed the harsher, punkier side to the band. Both teasers intriguingly point to what may be a multi-faceted album.

Perhaps the most interesting thing about Mosquito’s build-up though is the utterly deranged and really quite brilliant artwork featuring the garish image of a mosquito eating a giant baby.

Mosquito will be released on 15 April through Polydor. The band return to the UK in May for three shows, including a headlining ATP’s I’ll Be Your Mirror event at Alexandra Palace in London. Full details of their UK dates can be found below.