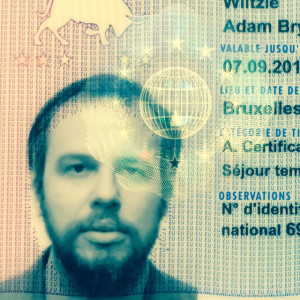 In 2014, Adam Bryanbaum Wiltzie released his second full-length album entitled Atomos, under his project A Winged Victory For The Sullen with fellow artist Dustin O’Halloran to much critical acclaim.

Now Wiltzie turns his attention to his solo work with new release Travels In Constants Vol 24, a four track EP, made when he was recording new orchestral works for his much anticipated next Stars Of The Lid album in Budapest, with the Budapest Art Orchestra. The same orchestra who recorded on Eurovision 2014 winner Conchita Wurst’s Rise Like A Phoenix, incidentally.

Wiltzie first chose to give away Travels In Constants Vol 24 via a limited edition mail order subscription series which has seen releases by Explosions In The Sky, Bonnie Prince Billy and Mogwai.

Here he guides us through the new EP, which you can stream below…

1. The Endless Battle of the Maudlin Ballade Part 1

This was originally a sketch, written as a possible piece for Atomos, but after the original string session, it did not really fit in the form of a string quartet. It needed the lushness that only a large string orchestra can bring.

2. The Endless Battle of the Maudlin Ballade Part 2

I reckon a while ago I came to the conclusion after the success of the last Stars Of The Lid opus, that the creative person should have no other biography than their works. I was continually hounded for more of this, more of that, to the point it felt completely fake. So I just stopped doing it, and moved on to something else. Which essentially led to the start of A Winged Victory For The Sullen. Ultimately, I am aware that the economy of contemporary art and music is quite difficult and the fact that I can exist at all as an artist, well, I’m extremely lucky to have earthlings who are interested in what I do. But you get into extremely treacherous territory when you start thinking about your audience. As I feel many of my contemporaries become so lost up their butts when they have success, they seem to stop making music like they used to when no one cared or knew they even existed. When I put out my first record, Ned’s Atomic Dustbin was top of the chart’s for Christ’s sake!

Dendermonde is a city in East Flanders that was also the Birthplace of Brian Eno’s mother. I met him some years ago, and he told me that he was half Flemish, and all of his family on his mother’s side came from around this village. That piece of trivia I have always found completely fascinating, for no other reason than I also live in Flanders.

4. The Endless Battle of the Maudlin Ballade Part 3

I reckon I have always been hardwired for bad news, sullen faces and sad memories. This track personifies every piece of music I have ever written.

Adam Bryanbaum Wiltzie’s Travels in Constants Vol 24 is out as a self-released download now. Tour dates and further information can be found here.