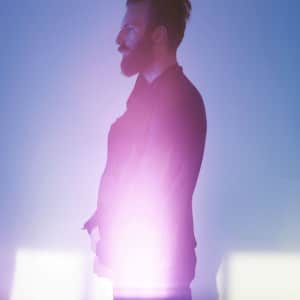 It will take a while for the good stuff to come, but don’t give up on Ben Frost’s first (and long awaited) offering from the upcoming Mute-released album A U R O R A.

Once a protégé of Brian Eno, Frost produces music of epic proportions and Venter is the centrepiece of what’s to come on the album. For the first four minutes, all you get is random noise and drone, but smack bang in the middle of the track – and when you least expect it – comes a sonic storm full of pulsating melodies and rushing sounds mashed with intense chimes and thin, almost transparent, beats. It’s like a journey through some dense, dark woods – sounding like a confused mess and a perfectly coherent stream of noise all at once.

For those not familiar with Frost, you can hear his contribution to Swans’ The Seer, Tim Hecker’s Virgins and Colin Stetson’s New History Warfare trilogy, with whom he collaborated before joining forces with drummers Thor Harris of Swans and Greg Fox of Guardian Alien on the upcoming A U R O R A. In a nutshell – not that it does it any justice, you simply have to hear it for yourself – Venter is an intricate and hypnotising piece of production that could easily put you in a trance given the chance and within the right circumstances. Brilliant stuff.

More on Ben Frost
Ben Frost – Aurora
Why I Started… A Festival (Or Two)
Track Of The Day: Ben Frost – Venter