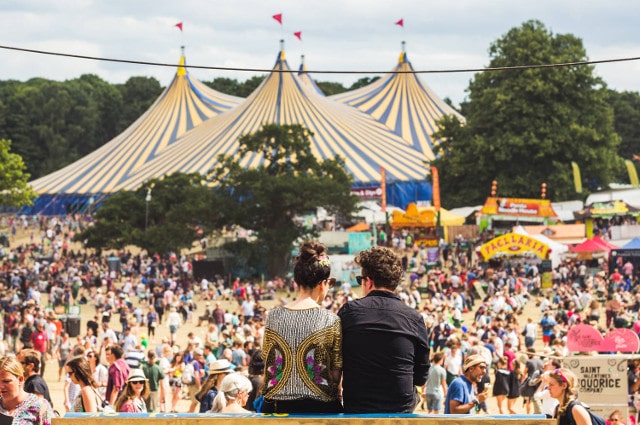 Recent run of good weather left you staring longingly at the cupboard you cram your tent into? Not sure where to even begin with the ever-growing plethora of festivals across the country? Well, fear not. We’ve told you about our top 10 London festivals, and here’s musicOMH’s guide to our 10 favourite weekend festivals happening elsewhere.

What: The midlands-based annual metal/rock/punk festival has become something of an institution, boasting some of the genres’ most high profile acts.
Why: This year’s looks set to be a classic line-up, with pretty much back-to-back legendary bands
Who: Rammstein, Black Sabbbath, Iron Maiden, Korn, Deftones, NOFX, Jane’s Addiction, Napalm Death, Pennywise, Megadeth, Disturbed
Tickets: £225 from www.downloadfestival.co.uk

What: Ask any Glastonbury-goer what they make of this year’s line-up and you can pretty much guarantee they’ll tell you “it’s not about the music”. This is the probably the ultimate festival; it’s mind-bogglingly huge, so you can completely lose yourself.
Why: It might be a cliché, but it’s true; every music fan should go to Glastonbury at least once – though we defy you not to return. Glastonbury set the blueprint for festivals, and despite what people might say, it’s still as good as ever.
Who: Adele, Muse, Coldplay, ELO, PJ Harvey, Beck, LCD Soundsystem, New Order, ZZ Top, Sigur Rose, Grimes, Ellie Goulding, Mercury Rev, M83, James Blake, Underworld, Gregory Porter, Santigold, John Grant, Cyndi Lauper
Tickets: Sold out long, long ago!

What: Latitude is one of the most eclectic of the major festivals, boasting an impressive line-up …and not just on the music front. Now in its 11th year, Latitude also boasts a weighty theatre, poetry and comedy schedule
Why: It’s all set in beautiful surroundings and, despite its size, manages to feel fairly intimate, full of surprise, ‘secret’ performances which will excite literary, theatrical and musical types equally.
Who: The National, New Order, Grimes, M83, Father John Misty, Perfume Genius, John Grant, British Sea Power, The Maccabees, Courtney Barnett, Chvrches, Nathaniel Rateliff and the Night Sweats, Laura Mvula.
Tickets: £205 from www.latitudefestival.com

What: This mass gathering of international musicians had rather more humble origins. The World of Music, Arts and Dance organised its first festival in Shepton Mallet in 1982. The Peter Gabriel-fronted organisation has since rocketed, holding festivals across the globe, but this is its flagship event.
Why: Whether you’re a fan of sounds sourced from around the world, or just curious, WOMAD has established itself as the definitive world music gathering.
Who: George Clinton Parliament Funkadelic, John Grant, Roots Manuva, Baaba Maal, Ibrahim Maalouf, Hot 8 Brass, Baloji, Pat Thomas, Asian Dub Foundation, Charles Bradley, Les Amazones D’Afrique, Ana Tijoux
Tickets:£175 from www.womad.co.uk

What: Unlike Glastonbury, Cambridge is absolutely all about the music. No matter what the line-up, the punters there will lap it up. From sunset until pitch black, rows of deckchairs are lined up in an orderly fashion, collapsed only when the jugs of real ale make dancing too tempting a proposition. The audience tends to be a bit older than most festivals, and there are usually plenty of families there too, something organisers seem to cater for in their programming.
Why: This is probably the best folk festival in the world. From legends to new comers, the best in the business flock to Cambridge.
Who: Gogol Bordello, Imelda May, Kate Rusby, Afro Celt Sound System, Glen Hansard, Christy Moore, Mary Chapin Carpenter, Eliza Carthy and The Wayward Band, KT Tunstall, This Is The Kit
Tickets: £159 from www.cambridgelivetrust.co.uk/folk-festival

What: Now in its 10th year, this indie-pop extravaganza takes over a heritage railway centre in Derbyshire for a weekend, with gigs taking place in a train shed, church and even on a steam train, as well as the headliners’ outside stage.
Why: It’s a festival with soul; carefully curated, with lots of lovely little touches – a bar pulled together by the local CAMRA branch, an owl sanctuary shows off its charges, the campsite puts on a late night tented disco, and there’s always an amazing supply of merch and twee crafts for sale.
Who: Saint Etienne, The Spook School, The Aislers Set, Haiku Salut, Comet Gain, Bearsuit, Darren Hayman and The Secondary Modern, The Lovely Eggs, Emma Pollock, Flowers, Simon Love and The Old Romantics.
Tickets: From £72 from www.indietracks.co.uk

What: Reading and Leeds is one of those coming of age type affairs; everyone remembers their first time and the line-up is never as good afterwards.
Why: It captures the zeitgeist each year; its acts are the edgy side of Radio 1, the front cover of the glossies; if you’re in a big group, there’s bound to be something for everyone.
Who: Foals, Disclosure, Red Hot Chili Peppers, Two Door Cinema Club, Imagine Dragons, The Vaccines, Biffy Clyro, Fall Out Boy, Crystal Castles, Slaves, Savages, Hinds
Tickets: £213 from www.readingfestival.com

What: End Of The Road is pretty much the UK’s gold standard festival; its consistently brilliant line-ups make their announcement one fans genuinely wait for with bated breath.
Why: It’s set in lovely woodland with an atmosphere that feels pretty unique; friendly but, somehow, serious about the music. It’s a real muso event, where strangers bond over a love for Field Music B-sides over a 3am glass of hot cider.
Who: Joanna Newsom, Animal Collective, Bat For Lashes, Cat Power, Devendra Banhart, Goat, Field Music, The Shins, Teenage Fanclub, Savages, Phosphorescent, Sam Beam and Jesca Hoop, M Ward, Scritti Politti, Omar Souleyman, Basia Bulat, Tigercats
Tickets: £195 from www.endoftheroadfestival.com

What: Rob da Bank’s four dayer is a relative newcomer, with its first outing taking place in 2004. It now welcomes around 60,000 over the Solent and is well known for its themed fancy dress parties. This year’s theme is The Future, so expect lots of tin foil and hover boards.
Why: Because this year they’ve made what they reckon is the world’s biggest bouncy castle.
Who: The Cure, Hot Chip, Fat Boy Slim, Bastille, Katy B, Wolf Alice, The Human League
Tickets: £190 from www.bestival.net