Track Of The Day: Sky Ferreira – You’re Not The One 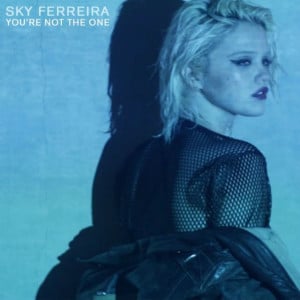 Sky Ferreira herself may be something of a divisive character in the world of music right now – you either love her or hate her, pretty much – but one thing is for sure: when it comes to her single You’re Not The One there’s very little not to like.

It’s all there – the bouncy poppiness combined with catchy melody and even some metallic beats that altogether make the track more of an anthem rather than a mere song. It heralds Ferreira’s debut album Night Time, My Time, which is officially released in the UK today after one hell of a wait.

And while it’s not a brand new track by any means – not only has it received plenty of airplay, it’s also been a steady inclusion in Ferreira’s live sets for months – the sing-along quality of it means it’s not likely to disappear from radio or your playlist any time soon. You’re Not The One is grungy electronic pop but manages to avoid sounding like the absolute mess such a combination would suggest. The yelping hook is an absolute killer and, judging from the rest of the album, there’s plenty more of this kind of stuff to come. Be warned, though: hear it once and you’ll be replaying it in your head for the rest of the day.