Track Of The Day: Arcade Fire – We Exist 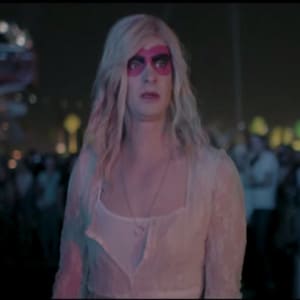 In the video for the third single off Arcade Fire’s latest album Reflektor, you get to see Spidey like you’ve never seen him before.

By Spidey we mean Amazing Spiderman 2 star Andrew Garfield, and by never before, we mean in complete drag – blonde wig, hotpants and high heels. Directed by David Wilson (and partly filmed during Arcade Fire’s Coachella performance this year), the video is a perfect complement to singer Win Bulter’s song lyrics “about a gay kid talking to his dad” for the first time about coming out. We Exist is clearly about supporting gay rights and, overall, a pretty touching and empowering anthem with a strong message of equality.

Also, who know Garfield was an amazing dancer – check out his Flashdance-like moves during a semi-hallucinatory moment towards the end (the rednecks that join in actually do a decent job too). Another reminder why Reflektor topped the charts in over 40 countries.