Track Of The Day: Jenny Lewis – Just One Of The Guys

by Nina Bertok
published: 5 Jun 2014 in News, Track Of The Day
Tweet 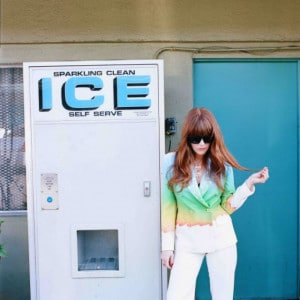 Trying hard to fit in, pretending to be one of the boys, the deafening sounds of the biological ticking clock… That and more is what Jenny Lewis is crooning about on the new track Just One Of The Guys.

Overall a song about anxiety, midlife crisis and confusion – peppered with bouts of insomnia and grieving – Lewis has openly admitted that the new song as well as the entire forthcoming album, The Voyager, was very much inspired by the two great losses in her life: the death of her estranged father and the breakup of her band Rilo Kiley.

Remarkably, despite being about such grim topics, it seems the album is going to be warm, sunny, pretty and very poppy musically, if Just One Of The Guys is anything to go by. Produced by fellow singer-songwriter Beck and expressing deep heartbreak while wearing a big, numbing smile across its face, it’s a rootsy, bittersweet country gem written in the midst of a personal crisis.

And a meltdown never sounded so good.