The 2 Bears – The Night Is Young 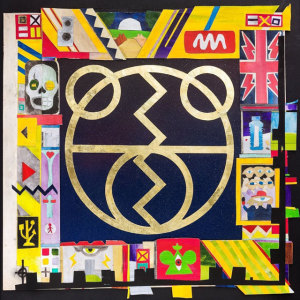 Be Strong, the first album by London’s The 2 Bears (Hot Chip‘s Joe Goddard and Raf Daddy) was always intended to be played loudly at parties and in clubs; putting it on in any other situation would be doing it a massive disservice. Their brand of dance – big, thumping house anthems with influences from across the world – is both boisterous and playful, and it struck a chord with many a raver.

For their second LP, The Night Is Young, their wide-eyed giddyness has not diminished. Inspired in part by their visits to South Africa as part of a project organised by youth magazine Live – they collaborated with some local singers for a handful of tracks – this is just as relentless in terms of energy and bigger in scope. The fact that it’s very hard to resist dancing along to probably speaks volumes about how successful this turns out to be.

If anything, all their best qualities have been amplified. When they are truly on form, The 2 Bears can evoke memories of the past and make it not sound like a horrible, lazy pastiche. Ultimately, it’s the duo’s own hooks that are more noteworthy than their aesthetic influences. Not This Time, an infectiously catchy slice of disco house, illustrates this perfectly, whilst Angel (Touch Me), the best song by quite some distance, features stabbing piano chords set against a thumping rhythm that feels comfortingly familiar. There’s even a quietly ferocious bite to some of their melodies. Money Man’s lyrics aren’t particularly subtle (“Don’t give up cos we’re under attack/And the money man wants to break your back”) but it makes for a great contrast when placed against sunny and uber-poppy reggae instrumentation, especially with help from a buoyant Stylo G.

Of course, an hour of this would be exhausting. So whilst the first half is comprised of bangers and pop tunes, the second half is a bit more experimental and contemplative. Mood and rhythm are the dominant factors and it’s at this junction where some of the record’s real hidden gems lie. Modern Family skips along for a breezy couple of minutes and is instantly followed by Mary Mary, a mid-tempo jam that’s peppered with all kinds of vocal samples as all manner of differing layers – synths, acoustic guitars, tribal drums – come and go. If Run Run sounds like a truly demonic hallucination, album closer Sleepwalking sounds like the soothing comedown. The peak of this section is undoubtedly the title track – a sprawling and slow-burning release of pure joy.

It’s very easy to fall in love with The Night Is Young, with its eclecticism and enormous hooks. A good chunk of these tracks should be regular fixtures in DJ sets across the country over the next few months, though nearly every single one is tailor-made for the clubs anyway. The fact that it’s not doing anything particularly new doesn’t really matter because it’s hitting all the right notes and pushing all the right buttons. Most of all, just like their debut, it’s a lot fun.

The 2 Bears on Spotify