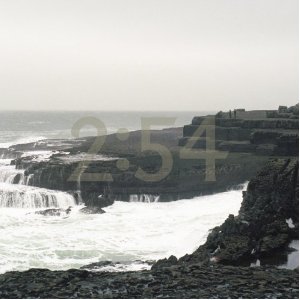 There’s a lot of importance put on debuts. Often that’s understandable. These days it may well be all we get from a performer before they’re whisked away to a better life. Sometimes that’s fair (Hello Matt Cardle. Yes, we will have fries with that), but it can seem like a stack of additional pressure on bands who’d probably be better served being cut a little slack.

But slack is not something 2:54 need. 2:54’s debut does not require excuses to be found for its creators’ – sisters Hannah and Colette Thurlow – relative inexperience. Because it does not sound like they are new to this. It is an album which arrives remarkably well formed.

It’s also an album that works best as an album. We’re not suggesting that some albums work better as devices for divining water; more the old-fashioned idea of an album being judged as a complete set of 10 songs rather than a mechanism to launch three singles, accompanied by seven bits of ‘will-this-do’ filler.

Devote 40 odd minutes of your time to 2:54 and you gain the full benefit from the shadowy spell the sisters Thurlow create. You become fully enveloped in the dark, hypnotic, romantic, ever-so-slightly macabre atmosphere that abounds.

Which isn’t to say that this isn’t an album of moments. No, 2:54 has plenty of those. The guitars of Revolving, jittering like Interpol‘s teeth on a freezing cold night. The swooning arcs that swoop across A Salute. The pounding, processed, almost motorik drive of Sugar. The way Circuitry is pulled back from pulling fuzzy, Kevin Shields shaped holes in the surroundings by an ‘ATTEN-SHUN’ military drum-roll, oh, it’s an album with masses of moments.

But the rest of 2:54 isn’t overawed by them. Each song expertly fits and builds together to form something more than the sum of those details. There aren’t vast, seismic shifts of tone, style or pace, but then if there were that would do little more than shatter the atmosphere that’s key here.

They share with The xx the ability to make songs feel intimate, yet strangely spacious. The also have that knack of making the world contract to be solely about what’s going on between your ears.

2:54 is deep and dramatic, taut and poised. It stands up to repeat listens with a unperturbed grace and a wonderful habit of showing you something new and unheard each time. It is soothing and yet off putting. Precise and yet loose. It is a good thing. Nay. A great thing. If there’s a debut which sounds less like a debut this year we’ll be astonished.