by Andy Baber
published: 20 May 2013 in Album Reviews
Tweet 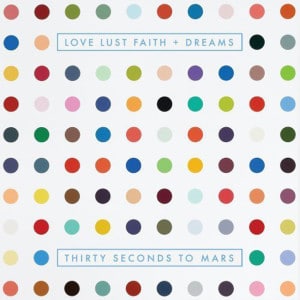 As you would expect for a band led by a film star, 30 Seconds To Mars are not a band to do things by halves when it comes to promoting themselves. As such, it was not particularly surprising to hear that they were premiering the first single from their fourth album by literally sending it into space. While it paved the way for numerous bad puns, it’s hard not to admire Jared Leto and co’s imagination and ambition.

Following their reasonably well received though overblown third album, 2009’s This Is War, 30 Seconds To Mars were always going to have to go some to take things to the next level. But despite the obviously ostentatious promotion of the album’s first single, their return, Love Lust Faith + Dreams, is actually less bombastic and more experimental when compared to its predecessor.

“This is more than an evolution, it’s a brand new beginning,” said Leto of the record. “Creatively, we’ve gone to an entirely new place, which is exciting, unexpected, and incredibly inspiring.” 30 Seconds To Mars have certainly not just tried to simply go even bigger than This Is War – even if Up In The Air suggested that would be the case. Instead, album number four actually sees the band take more risks.

It opens with the almost cinematic Birth, which kicks things off with dramatic brass combined with violins and a thumping beat on the mainly instrumental track. It’s followed by Conquistador, a song that could have easily fitted on This Is War, with its big guitar riff and repeated chants of “we will rise again”. The combative lyrics and chanting are almost staples of 30 Seconds To Mars’ sound, and they feature heavily again here.

Up In The Air continues the pulsating start to the album, with Leto’s emotive wailings – plus a cacophony of ‘whoa-ohs’ – abounding over throbbing synths, as he sings: “You were the love of my life, the darkness, the light/ this is a portrait of a tortured you and I.” The melodramatic quality of the band remains as present as ever, but as the album progresses, the full throttle, gung-ho attitude begins to recede.

Do Or Die sees the trio replace the barrage of guitars with sprawling synths – as well as the inclusion of even more ‘whoa-ohs’ – while City Of Angles is the sort of corny ballad that makes 30 Seconds To Mars such a love-them-or-hate-them band. Then there’s End Of All Days, which features a posturing vocal from Leto over a crunching synth line, as he repeatedly screams: “All we need is faith.. Yet, the more they try to experiment, the worse the album gets.

Nothing exemplifies this more than the ridiculously pompous Pyres Of Varanasi, where the synths eventually evolve into what sounds like an out-take from the soundtrack from Inception. It screams of a band trying far too hard to differentiate themselves from their previous work, especially as Leto starts whining in a strange accent. Whatever he’s saying, it doesn’t sound nice. Penultimate track Northern Lights makes a better fist of things, but by then it’s far too late.

After starting with what sounded like a clear direction, Love Lust Faith + Dreams descends into something of a mess. It opens as if an extension of This Is War, before the band suddenly change things up with added synths. While Leto’s vocals remain as central as ever, there’s only so much you can take of his constant overbearing bellowing. Love Lust Faith + Dreams was set up as a new chapter for the band. The end result just feels empty.

30 Seconds To Mars MP3s or CDs

30 Seconds To Mars on Spotify