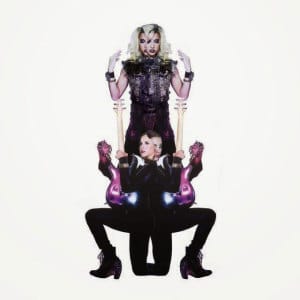 3RDEYEGIRL are living something along the lines of what they call ‘the dream’. The story goes that Prince himself cherrypicked them off of the internet, calling them in to become his backing band and making him his protégés. In 3RDEYEGIRL you will find three women of exceptional musical ability who combine to form a hard funk rock band that’s full of energy, power and professionalism. With an enviable platform to work from, the exposure that Prince has given them has been tantamount to their success thus far. But with their debut album, it becomes clear that they’ve got a long way to go if they ever want to be remembered as something more than Prince’s backing band.

3RDEYEGIRL have described themselves in interviews as a ‘hardcore, driven, raw sounding rock group’, but in reality, they are really creating pop music. It’s not pop music as we know it today – it’s not Taylor Swift – but it is pop music. And 3RDEYEGIRL are clearly fantastic musicians, because of course Prince isn’t going to call in just anyone to work with him. They have a clear understanding of how songs should work.

But throughout this album you get the feeling that Prince provides the stabilisers, and when he lets them ride off on their own, they are still stumbling without his support. Tracks such as WOW and first single PRETZELBODYLOGIC are made by Prince’s influence. WOW is a startlingly strong start to the album, and is led heavily by Prince who sings lead vocals, and purrs as he chats you up by means of raunchy lyrics and powerful riffs, whilst the latter exhibits an incredible ability to make you want to dance. It’s a solid, promising start to the album.

Leading track PLECTRUMELECTRUM, a hard funk rock instrumental track, is a massive jam between the artists, giving Prince the perfect opportunity to show off and launch into huge guitar solos. It’s powerful, certainly, but it’s as though Prince is using the band as his puppeteers. That’s not to say that it isn’t completely jam-packed with powerful, gut-wrenching riffs that plea to be heard in the live setting; there is an utter electricity to these tracks that cannot be denied.

When he does eventually let the band roam free, things start to flounder. The power and energy that 3RDEYEGIRL possess is still marvelously evident, yet the songwriting and lyricism is not quite there yet. WHITECAPS and BOYTROUBLE are perfect examples of this. You begin to wonder whether they’re quite ready yet. It is all very well that Prince has found these staggeringly talented musicians that are full of potential, but it’s not clear how much of it is him lending them a hand for their sake, or whether it’s for his own exposure and benefit. The presence of FUNKNROLL on not only this album but also Official Art Age is further evidence of how this relationship is working out, because what’s better than being paid for a track once? Well, being paid for it twice, of course.

ANOTHERLOVE proves to be one of the highlights of the album, but it might be because it sounds more like Prince, a feature on many of the better tracks on this collection. As a collaborative album between Prince and 3RDEYEGIRL, this is a commendable album and the two acts clearly work together incredibly well and challenge one another. But the most magic always happens when Prince’s presence is at its strongest.