65daysofstatic – We Were Exploding Anyway 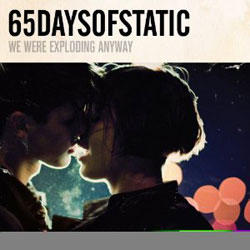 As anyone who has witnessed one of their jaw-dropping live performances will attest, 65daysofstatic are a band that excel at the dramatic.� The Sheffield four-piece, deservedly acclaimed over the course of their three previous albums and numerous tours and festival appearances, have up until now been known and admired for their vigorous, exhilarating guitar-led instrumental music, of a style that could be described as post-rock, although the band themselves dislike the term.� But on album number four, things seem to be evolving.

There is certainly no less sense of drama than on previous releases.� Crash Tactic’s glorious euphoric peaks and portentous chords; Weak4 – dark and compelling; Tiger Girl’s gradual, incremental build-up to a soaring peak all attest to a band skilled at manipulating the listener’s adrenal glands.�� The incredibly detailed, layered and proficient way in which they combine so many different elements to allow a track to develop is intriguing, and gives an enjoyable sense that the unexpected is just around the corner.

Noticeable this time round is a marked increase in use of electronics.� Whilst certainly not to the exclusion of guitars – which still feature significantly on tracks like Mountainheads, Crash Tactics and Piano Fights – synthesised sounds are nevertheless much more prevalent.� This has only enhanced the band’s ability to create exciting music.� Publicity materials accompanying the release talk of a new-found, or rediscovered appreciation of Daft Punk, house music and hedonism, although added to that list could well be acts like Holy Fuck or Fuck Buttons, towards whose sound this album often veers.

Several times a deep, dubby bass defines and outlines a track (Moutainhead, Weak4, Go Complex), pulsing and throbbing.� Crash Tactic’s synths are shrill and trebly, full of quirky squiggles, while Come To Me starts with a rush of simulated radio static.� Piano Fights is the most ‘organic’ track, with its alternating piano chords and choruses of guitars: if this is a fight it is more of an affectionate play fight between the instruments than anything more vicious.

Voices feature on three tracks.� Most significantly, The Cure‘s Robert Smith provides his distinctive vocal to Come To Me.� A curious decision, the inclusion of this more conventional ‘sung’ song in the middle has the unfortunate effect of rather dissipating the atmosphere and momentum.� Sounding a little like an early Bloc Party track, it’s the least enjoyable part of the album.

The following track, Go Complex, uses unintelligible snippets of vocodered vocal, but only as any other instrument would be used, making for a welcome addition to a track that it is deliciously unsettling and difficult to categorise: is it playful or rather sinister?� Completing the run of three is Debutante, with its angelic, celestial female voice delivering swoonsome “ah-ah ah”s, adding texture to a soundtrack-style tune that is otherwise one of the less dramatic or exciting.

A gamut of moods and emotions are conveyed.� Dance Dance Dance is romantic, Crash Tactic euphoric, Piano Fights wistful, Weak4 angry.� Throughout though, the intensity is somehow lightened by a feeling of playfulness (weird bleeps and glitches appear, cowbell sounds are deployed, buzzes buzz).

This sense of playfulness extends from the music into the track titles, several of which seem to contradict the music – the aforementioned Piano Fights, but also Dance Dance Dance (which starts off slow and stately, then becomes too fast and frenetic to be danced along to) and Weak4, whose ire and rhythmic urgency is anything but ‘weak’.

The album closes with Tiger Girl – one of the high points along with Crash Tactic, Piano Fights and Weak4.� Perhaps the best illustration of the band’s supreme mastery of pace, suspense, crescendo and dynamics, the krautrock pace is gradually, incrementally built up with layer upon layer of detail; the serene melody underpinned by increasingly frenetic drumming, for example, or the inclusion of brass and string sounds as the track reaches its peak, then falls away slowly.� It’s an appropriately dramatic ending to an album full of drama.