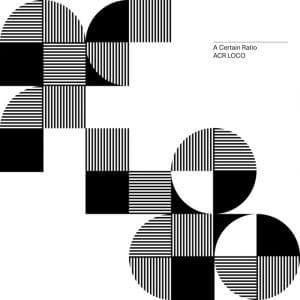 In December 1982, the post-punk group A Certain Ratio flew to New York for a two night residency at the notorious Danceteria nightclub. They had been warmly anticipated, being seen as the Anglo equivalent to the city’s then musical darlings Talking Heads. Both groups successfully took a functional approach to songwriting and fused African inspired drumming with urgent guitars and hypnotic wordplay. Both had recently covered soul and funk classics, and were known to dress a little smarter than the average street punks.

The first night they played, a local dancer and singer with the weirdly catchy religious name, Madonna, was booked to support them in her debut live performance. It was a portent for what was to follow, as shortly after, the allure of disposable and prepackaged modernity took hold and the flourishing underground fell out of grace with record buying crowds. But that swing towards socio-cultural blankness and self-aggrandising didn’t deter the members of A Certain Ratio, who carried on down their identifiably irregular path.

Fast forward to the year 2020 and, amongst much else, 40 years have elapsed since their debut album The Graveyard And The Ballroom, and the band are releasing ACR Loco, their 11th album. It arrives in the midst of a renaissance of sorts, following last year’s weighty and widely commended ACR: Box collection which traced their evolution as a band, very much a product of the city of Manchester, collectively in tune with their surroundings. Their sound mutated as rapidly as the city began to find itself gentrified. Lumped in initially with Joy Division, they were precise and feisty starting out, all stuttering bass lines and staccato drum fills. They then quickly implemented the compulsory Balearic house energy associated with the other Factory bands like The Happy Mondays of the early ’90s before settling into their current manifestation, a blend of off kilter dance pop, with a sprinkling of tropicalia, NuYorican soul and big beat in equal measure.

As the album title infers, ACR Loco addresses the crazy state of the planet right now. Starting with Friends Like Us, it seeks to critique some of the interpersonal disconnect that plagues humanity. The miasmic panting melody hangs around like a haze, untethered and diaphanous. Opinions about relationships and behaviours are debated until the impervious beats find their resolution and solidify into a drum and bass fuelled hymnal. Bouncy Bouncy begins with a manifesto, an address to listeners to rediscover the sense of community spirit lost in the fight against the continued onslaught of capitalist greed and to regain the joy of responding to music, before developing into a bonkers smash of cosmic funk and Franco-Latin pop in which vocodered robot choirs battle Mancunian preachers and smoky French seductresses. Drums tumble in, and cowbells sound out as it brings to mind the kind of crate digging glee evident in the early ’90s chart bothering singles by S’Express and Deee-Lite.

Punk funk stormer Yo Yo Gi continues the revelries with samples of northern bus drivers overlaid with onboard travel information, all broadcasting out over a wobbly 808 Balearic thump. This number doesn’t need to explore options; it’s guiding you onwards to unknown destinations. Similarly, Supafreak boldly lays out the band’s intention: “We want to funk.” The lyrics however speak of being out of place, trying different tacks, needing guidance. The bassline skips and horns blare, the sound of a city alive. When they get to the sentimental Always In Love, the party winds down to a fidgety pledge of encouragement, demanding listeners remain true to themselves. Comparable to the recent releases by their contemporaries Blancmange, it shares that group’s dependence on modest electronic structures and sentimental evaluation.

Family is further reminder of the band’s sonic roots, replete with slapped bass, dissonant idioms and neo-soul evangelising, whilst Get A Grip is a suggestive paean to the hazards of sensual uncertainty. Wah-wah guitars scuff across rumbling basslines as the song’s narrator seeks transparency. What’s Wrong continues with the practice of scraps of travel information; this time, an air traffic controller asks the occupants of a vehicle what’s troubling them, advising help is on the way. Further soundbites convey an awareness of the increasingly bureaucratic menace of data surveillance we’ve apparently signed ourselves up for, and our dependence on technology to sate our expanding sexual urges. The record ends with the contradictory Taxi Guy. Peppered with fragmented crowd noise, carnival drums and a barrage of party whistles over an increasingly spiralling Balearic refrain, in the last few seconds it bites its tongue and succumbs to some agreeably flamboyant and squelchy acid house.

A heady amalgam of Ibiza chill-out anthems and Carnival bangers, with poignant choruses and repeated minor chords, ACR Loco is a stomping reminder to celebrate the eccentric pleasures of life in multicultural cities and the liberating night life they offer. At its core is an international party record, being released as the world metaphorically and literally burns, asking for a safe place to touch down.

A Certain Ratio MP3s or CDs

A Certain Ratio on Spotify