A Grave With No Name – Passover 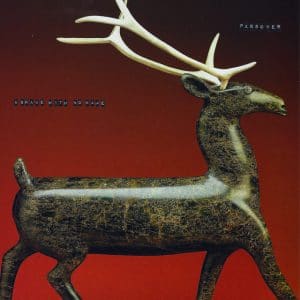 It’s a depressing subject, death. Especially that of a loved one, someone held close to your heart. People can pass in the blink of an eye, the sudden shock a challenge to deal with in itself; alternatively, long term illness can render a person immobile for years and theoretically it should give that person’s relatives plenty of times to come to terms with the inevitable. Except, sadly, it doesn’t usually happen like that, with the finality of death generally overwhelming all other aspects in all other circumstances.

Multi-instrumentalist singer-songwriter Alexander Shields was clearly suffering such loss at the time his sixth A Grave With No Name LP, Passover, was conceived, his loss being his grandmother. Subsequently revisiting her – and his family’s – home dredged up old memories, and it’s these, coupled with the pain of new memories forming with a big ‘grandmother shaped hole’ in them, that drive this new album.

Previously, Shields had utilised a revolving carousel of musicians to help him achieve his goals as his creations became more fleshed out after having moved on from its initial seed – a lo-fi bedroom project. We had seen development, from sparse folky beginnings to more exciting, electric tinged efforts – older single Aurora springs to mind amongst others. Now, though, he’s stripped it all back, being joined by just childhood friend Daniel Paton on drums and bassist Ben Reed, with Misha Hering, producer/engineer at Hackney’s Holy Mountain studio, taking knob-twiddling duties.

Lead single Wreath is, according to Shields, “an exploration of the relationship between humanity and the land which we inhabit”, basically concerning the fact that the human race is only here for the short term whereas the earth, the solar system – the universe, even – is far greater. It’s a little more upbeat than the majority of its peers, its stop-start nature flicking between the sombre mood of Passover’s main theme and one depicting a glimmer of hope, perhaps, sounding similar to inoffensive acts like The Proper Ornaments.

By The Water’s Edge is, musically, as chirpy as it gets and when there’s a bit more to a track than overwhelming sadness, it’s wonderful, despite asking questions like “is this where she used to sleep” and seeing ice in a frozen over lake (or river) instead of a shimmering reflection. Opener Supper tells of shovelling snow with his sister in the winter as things begin with an inevitable feel but it’s moderate at this point.

Again, although extremely harrowing, the excellent Blunt Knives somehow manages to tackle the subject matter in a less sorrowful way, the gloomy, empty space it occupies being fascinating rather than upsetting. There’s a touch of welcome reverb/slide guitar for the funereal When I Pass Through Here, another beautiful cut despite telling of tasting blood. Pottery & Porcelain is also stunning, conjuring up images of a hauntingly atmospheric ride on the ferry of Hades where Charon delivers the souls of the living to the world of the dead.

Elsewhere, though, it can often feel like Shields has the weight of the world’s problems on his shoulders. Hunter epitomises sparseness, a morbid experience indeed, whilst instrumental Path does little else but fill a gap between two tracks, as does the shorter (interlude), this time intentionally. Kitchen recalls more memories, “where my father used to sit”, he sings, as if struggling to imagine, the track rather stumbling to its conclusion. Hot Blood also feels empty, a trait that is understandable and in common with how such loss can affect us all, of course, but by this time it’s reflecting the sadness so unwaveringly that it’s becoming tangible.

Seriously challenging from the start, Passover is no joyous celebration of life, occupying instead a place of mourning as Shields sucks you into his sorrow. At times it’s difficult to show as much empathy as you want to, with such a singularly focused outpouring becoming all-consuming. Lavish you with warmth and joy it will not, but as it engulfs you with grief and sadness Passover feels more like an album Shields had to get out of his system than an offering for others. As such, it’s easy to appreciate and admire, but difficult to enjoy. Let’s hope his grief moves on, as his minimalist core coated with a heavier brush had just started to become rather excellent.

A Grave With No Name MP3s or CDs

A Grave With No Name on Spotify