a-ha – Foot Of The Mountain 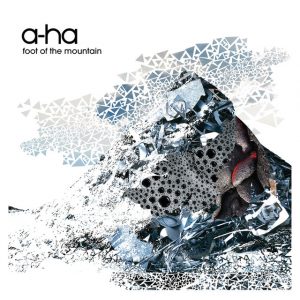 a-ha‘s big ’80s pop hits are, in the best possible sense of the word, ridiculous. The Sun Always Shines On TV stamps a big, steel-plated boot in the face of subtlety. Cry Wolf sounds like an audacious attempt to re-write Thriller as a massive orchestral pop song. And let’s not forget Morten Harket’s falsetto on the chorus of Take On Me (how could we?).

Foot Of The Mountain, the Norwegian trio’s fourth album since their reunion at the start of the decade, is, by contrast, a tasteful and restrained affair. Both acts might baulk at the comparison, but a-ha’s career has panned out a lot like Take That‘s. Much like Gary Barlow and company, a-ha underwent a lengthy hiatus before re-emerging with a sound more becoming of men of their respective ages.

In a-ha’s case this means they’ve abandoned their inclination towards bombast in favour of producing gently chugging, mid-tempo pop-rock. These are songs that would slot into most contemporary radio playlists with the minimum of fuss: Foot Of The Mountain’s third track, What There Is, reveals what Coldplay would sound like if they ever get round to having a synth-pop phase.

Indeed, Foot Of The Mountain has been billed as a-ha’s return to their synth-pop origins. That’s sort-of-true – keyboards feature prominently on tracks such as the OMD-like Riding The Crest – but the term ‘synth-pop’ seems an inappropriate one to use in relation to an album as unexciting as Foot Of The Mountain.

The standard of the songs never rises above the mildly pleasant, and occasionally – as on the self-consciously ‘widescreen’ title track or the wetter-than-a-fish’s-wet-bits Mother Nature Goes To Heaven – it’s pat and drab. The strangest track here is also the worst: the closing Start The Simulator is an unspeakably naff extended spaceflight metaphor (“Clear in the tower… Steady as she goes”) complete with a tittersome reference to “docking”. It’s also disheartening to hear Harket’s formerly fruity vocals flattened into nondescript homogeneity through apparent Auto-Tune abuse.

If the function of Foot Of The Mountain is merely to provide some competent new material to pad out the live set, then it performs it without breaking a sweat. But if a-ha want some tips on how a veteran pop act can enter middle age without drifting off into irrelevance, then they should get on the phone to a certain Mr G Barlow.