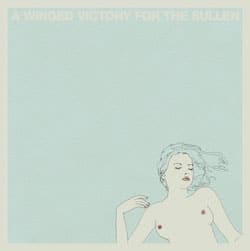 London-based neo-classical label Erased Tapes prove, yet again, to be a wonderfully distinct organisation of experimentalists. It is, indeed, always a risk to interfold electronic subgenres with musical styles that formed the foundation of western music culture, but with the likes of Nils Frahm, Anne Müller, Ólafur Arnalds and Peter Broderick on their roster, it is no surprise that A Winged Victory For The Sullen‘s eponymous record has been added to Erased Tapes’ grand discography.

Though the name of the duo is new, it is, in fact, a neat amalgamation of two contemporary and already influential musicians, namely ambient icon and Stars Of The Lid founder Adam Wiltzie and composer Dustin O’Halloran.

Commencing piece We Played Some Open Chords contains a mysterious effulgence, guided by interchanging from string pads to rigid yet cleansing piano slaps. All in it resembles a Debussyesque atmosphere, clashed with a low-tempo Thelonious Monk. Almost unnoticed, this counterweight of two separate classical instrumentations eventually fuses cleanly one with the another.

Requiem For The Static King Part One was composed in memory of the late Mark Linkous, making this one of the more intriguing pieces. Reverb is used efficiently, without abusing a musical technique that’s used regularly to escape from austere and unfurnished sounds, and instead convey a spacious, hallway effect. It’s a phantasmagoria of ambience.

Both musicians resemble the league of instrumental experimentalists, calling Tangerine Dream and Klaus Schulze of the Berlin School era to mind. They were, too, astounded by the use of ancestral instruments such as the French Horn, the bassoon, and even homemade pianos. Within Minuet For A Cheap Piano there seems to be that easing flow of ambient simplicity, portrayed by the slightly vinyl-distorted notes played, which are swiftly moved by that typical Stars Of The Lid middle-ground drone.

Steep Hills Of Vicodin Tears was one of the first A Winged Victory For The Sullen tracks to see the light of day. Like Requiem For The Static King Part One and Part Two, there is a fine recapitulation effect, constructing similar sounds and endlessly layering one on top of another with slight tweaks to each, splendidly transforming the piece into an audio-illusion as if one sound was being performed by the two.

All Farewells Are Sudden suggests itself as a distinct model within the suite. With the application of nature sounds and minimalism, it engages the listener into a quiet, unpeturbed atmosphere.

One wouldn’t and shouldn’t name this duo a ‘project’, as both classically trained musicians aspire to work together more on this nocturnal styled ambience. Classical music has been a personal faction of individual lives for centuries; there’s an era for everyone. With this debut it is clear that O’Halloran and Wiltzie have prosperously joined neutralist ambient and 20th century classical music together. In so doing they’ve formed aesthetically pleasing sounds which can allure every night-time audience.