A Winged Victory For The Sullen – Invisible Cities 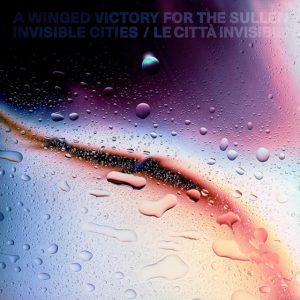 As A Winged Victory For The Sullen, Adam Wiltzie and Dustin O’Halloran have built up a reputation over the last decade for operating in steadfastly ambient realms. New album Invisible Cities is their score to the multimedia theatre production of the same name directed by video designer Leo Warner (which itself is based on Italo Calvino’s 1972 novel). The album broadly retains their defining stylistic principles, although there’s maybe a little toning down of certain elements to fit in with its soundtracking purpose.

Their albums to date have largely been rooted in a richly melancholic sound, with an unabashed, entrenched emotionalism appearing to run through every fibre, especially on their 2011 debut which at times sounded like it was itself weeping. The pieces here are shorter in length and on the whole maybe not as diaphanous or as overtly sad as some of their previous work but are still sources of shimmering and slow-moving beauty.

The Celestial City sees a mild, electronic drone move under the surface while there is even rising percussion on Thirteenth Century Travelogue which brings with it an implied darkness. Later, There Is One Of Which You Never Speak starts off like classic AWVFTS but also comes with moments of distortion, like ambient music after having suffered some form of fire damage. To those expecting friction-free ambient, it may come as something of a surprise. Closing track Total Perspective Vortex is similar, growing into something menacing and unsettling.

The likes of So That The City Can Begin To Exist and The Divided City stay closer to familiar territory, suspended piano chords gliding through the dense fog of the strings. The same applies on The Dead Outnumber The Living which moves like orbiting satellites or ripples across vast, cold lakes. The recurring motifs in Only Strings And Their Supports Remain show that while the title of the album relates to urban settings, in another sense they continue to conjure music well suited to arctic landscapes.

There’s been a fair bit of attention on music ‘to focus to’ recently, with more people working from home or in greater need of some form of escapism and, barring a couple of moments, it would be easy for Invisible Cities to find itself placed in this category. Yet, viewing their music in this way risks underselling it. On this outing, greater rewards arrive from a more engaged, active approach to listening, one that helps ensure that nuances and small details are appreciated. It might not ultimately have quite the impact of their earlier work but it still has much to offer, showing them still capable of responding to new creative surroundings and edging forward with small refinements to their sound.