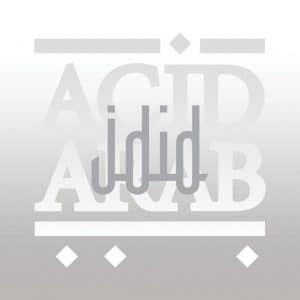 Jdid, “New” in Arabic, is the title of Acid Arab’s spellbinding second album, following 2016’s statement of intent Musique de France. Parisian duo Guido Minisky and Hervé Carvalho are this time expanded to a trio, joined by Rachid Taha-associated keyboardist Kenzi Bourras, and together they have honed their style still further, meeting up with scores of artists from across North Africa and the Middle East to explore a dialogue between western electronica and sounds from around the Arab world. At pains not to create “fusion” or to attempt reinvention of established genres, their production rather serves to place these music styles in a new context, giving Jdid as a whole a feel of a curated work, all of it ready for the club floor.

They are aided by a slew of guests from Algeria, Tunisia, Turkey, Syria and Niger, with the Algerians accorded the lion’s share of the featured spots. Vocalist Radia Menel stars on hypnotic, eerie opener Staifia, a slow-burner drenched in echoes which transports the listener to a world of endless dunes and clear, star-filled skies. Her compatriot Sofiane Saidi, who previously led on Musique de France’s standout track La Hafla, appears on woodwind-augmented, raï-recalling Rimitti Dor, while chanteuse Amel Wahby’s processed vocals centre complex rhythms and insistent piped lead on Nassibi, a track suggestive of a post-souk party, and Cheikha Hadjla’s heavily auto-tuned vocal performance rounds out the album with Malek Ya Zahri, where the splungy keyboards recall nothing so much as Gorillaz’ Feel Good Inc.

Elsewhere, returning Turkish artist Cem Yildiz comes to the fore on the ominous Ejma, and fellow returnee Syrian, “king of keyboard” Rizan Said, whose unmistakably wild synth sound is perhaps best known from his work with compatriot Omar Souleyman, brings the party to Ras El Ain. Tunisian/Belgian producer Ammar 808 joins in the vocals-free, hands-in-the-air propulsion of Rajel, while Electrique Yarghol, featuring Jordanian multi-instrumentalist Hasan Minawi, expertly blends cutting edge electro with heavily processed loops of what sound like pipes (he once appeared on a Arabic talent show playing drinking straws; perhaps he does so here too). Amongst it all, perhaps the least expected sound is to be found on Soulan, on which Niger’s Les Filles d’Illighadad mix delicate and very organic sounding Tuareg folk vocals, guitar and handclaps into subtle electronic backing, all to fine effect.

Only two tracks are bereft of guests, these being lead single Club DZ with its looped keyboard motifs, single bass note and Arabic scale, and Was Was, the production of which reminds just a little of Azari & III. Both serve to underline that Acid Arab, far from relying on their guests, are evidently genuinely interested in the sounds, scales and nuances found in music from these parts of the world, and the crossover potential that lies between their background in club-ready techno rhythms and more traditionally created works. On this compulsive collection, their laudable intellectual curiosity and infectious enthusiasm offer a different perspective on, and with it a welcoming entry point to, entirely compelling music that is as emotionally satisfying as it is intriguing.