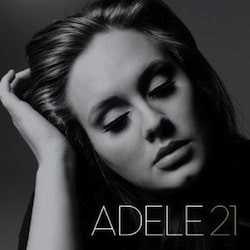 With her extraordinary voice, reassuringly dirty laugh and down to earth personality, Adele Adkins seemed manna from heaven from those looking (musically at least) for ‘the new Amy Winehouse‘ back in 2008.

Her debut album, 19, certainly had some standout moments but was marred by an over-reliance on filler tracks – understandable enough for a debut. But there was more than enough potential there to bode well for the future.

With 21, that promise is well and truly delivered upon. And the Winehouse comparisons aren’t likely to disappear – for, in a similar way that Back To Black was a massive step up in quality from Frank, 21 represents Adele’s coming of age.

As the old adage puts it, from great pain comes great art. And it really seems as if Adele has been through the emotional mill here. Almost every song oozes pain, sadness and anger, but with enough swagger to banish any accusations of self-pity.

Opening track Rolling In The Deep is a fine case in point. Produced by Paul Epworth, who creates a powerful wall of sound built on some phenomenal drumming, it sets the tone of the album perfectly, with Adele warning her unfortunate ex-lover “don’t underestimate the things that I can do”, before proclaiming “you’re gonna wish you had never met me”. It’s up there with Robyn‘s Dancing On My Own as one of the great ‘woman scorned’ songs of recent years.

Advance word for 21 suggested that Rick Rubin would produce the album. As it turns out, he’s at the helm for just four tracks, with names such as Epworth, Jim Abbiss (producer for Arctic Monkeys amongst others) and Ryan Tedder (the man behind Leona Lewis‘ Bleeding Love) also featuring. Nobody outshines Adele herself though – this is an album with her personality firmly imprinted upon it.

Rubin does produce a cover of The Cure‘s Lovesong. While not quite making the song her own, as she did with Bob Dylan‘s Make You Feel My Love, it’s still a fine, lovelorn rendition. Rumour Has It has more sass, a brilliant blues/soul anthem with more fantastic drumming and a cute lyrical twist at the end, while He Won’t Go is outstanding, a soaring soulful number that recalls prime Mary J Blige.

The only real misfire is the overproduced power ballad of Set Fire To The Rain. It’s a decent enough song, but Adele’s always sounded best when it’s just a piano and a voice. And she more than proves that notion with the two best songs on the album, Turning Tables and Someone Like You.

Turning Tables is a fragile piano ballad which really shows off Adele’s wonderful voice to its best effect – almost cracking with emotion at times, she really lives the lyrics. Yet, to quote a track from her debut, she saves the best till last with the torch ballad Someone Like You – just piano and that voice, it casts Adele as the spurned lover, turning up outside her ex’s house, now moved on and settled down, begging for a second chance. It’s desperately sad and utterly, utterly gorgeous.

21 really is one of the great ‘break-up’ albums, and the first truly impressive record of 2011. Here is a timely reminder that British soul hasn’t lost its mojo.