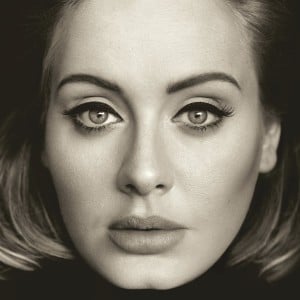 It only seems five minutes ago that Adele Adkins was just another teenage singer/songwriter, following in the footsteps of Lily Allen and Kate Nash, singing songs about London and boy, having a mouth like a sailor and singing backing vocals for Jack Peñate (remember him?).

It was, in fact, 8 years ago that we first heard those plaintive piano chords of Hometown Glory, and in that time Adele has become arguably the biggest British pop star we currently have: holding so much sway in fact that she can quite easily demand her album not be available on any streaming platforms, thus forcing people who want to hear it to actually – shock, horror – buy it. Even Taylor Swift eventually succumbed to the might of Apple Music.

So, Adele’s third album is easily the most anticipated record of the year, and is already on track to sell over 2.5 million copies in its first week alone – an astonishing achievement for an artist who barely plays live, never tours and has been pretty much silent for the past four years. Adele has, after all, never been one to play by the normal music industry rules (she pretty much broke America via a YouTube video of her singing at the BRIT Awards), but there’s a nagging feeling that 25 can’t possibly live up to all the hype.

And, in a sense, it doesn’t. It certainly won’t disappoint the legions of fans desperate for new material, but 25 is very much Adele playing safe. By now, you know what you’re going to get from an Adele album: lots of sad songs about former lovers, custom-made to make people cry on their pillow. Yet, there’s so much more to her than that, especially given that extraordinary voice: remember the sass of Rumour Has It, or the barely concealed anger bubbling under the surface of Rolling In The Deep? That side of Adele is nowhere to be found on her third record.

Having said that, it’s impossible not to fall under its many charms. Hello is the quintessential Adele comeback track – a mix of the sad minor piano chords from Someone Like You on the verse, before soaring magnificently into the Skyfall-like chorus. Yes, the lyrics seem like a retread of previous material: when you hear lines like “I was wondering if after all these years, you’d like to meet” you do want to reach through the speakers, grab her and shout “NO, ADELE, EXES ARE EXES FOR A REASON”. That becomes somewhat of a recurring feeling throughout this album. Yet the melody, especially on the verses, is so heart-stoppingly beautiful that you’re soon singing along.

When We Were Young, co-written with Tobias Jesso Jr, pulls on similar heartstrings – a hushed ballad which may not take too many risks, but is worth the price of admission for the moment when Adele’s voice cracks with emotion as she sings the line “my God this reminds me of when we were young”. If you can ignore the rather disconcerting feeling of a woman still a good few years away from 30 reminiscing about her apparently long-gone youth, it’s the sort of performance that will give you chills. This will be the song you’ll find difficult to escape from during Christmas and beyond, whether you want to or not.

25 becomes at its most interesting though when Adele steps out of her comfort zone. Send My Love (To Your New Lover) is one of those occasions, a collaboration with über-pop svengali Max Martin, a sassy, flamenco-tinged banger that’s one of the few moments of 25 that could be called danceable. Another highlight is River Lea (there’s a big water motif running through 25), which sounds absolutely enormous, a giant gospel-influenced stomp of a song which looks back to the comforting nostalgia of childhood with the bittersweet knowledge that you can never truly go home again.

Yet there’s a few too many times on 25 when Adele seems to be treading water. Tracks like Love In The Dark or Remedy may be beautifully performed but it’s very much what we’ve heard before. A Million Years Ago showcases another flawless vocal performance, but you’d be hard-pressed to remember much about it even after several listens, while All I Ask sounds oddly dated, despite the presence as co-writer of the ubiquitous Bruno Mars.

None of which will matter a jot to the millions of people who’ll buy and constantly play 25, of course – people expect Adele albums to do a certain job now, and 25 ticks all the relevant boxes. However, next time round it’ll be good to hear her break out of that comfort zone: while she’s earned the right to stick to that tried and trusted formula, a little bit of experimentation could go a long way.