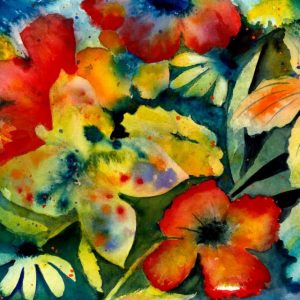 The latest musical offering from Adrianne Lenker is a classic exercise in turning a negative into a positive. After her band Big Thief’s European tour was abruptly curtailed in March due to the escalating Covid-19 pandemic, she returned to the USA and retreated to a rented cabin in the mountains of western Massachusetts. Soon, inspired by her surroundings and with the help of various friends, she set about writing and recording the songs and music that now appear on Songs & Instrumentals.

It caps a prolific period for Lenker, the last three years seeing her release a total of five albums (three solo and two with Big Thief). The Songs album will naturally be the release that generates more excitement among her growing and dedicated fanbase. It may be more of a slow burner than last year’s pair of Big Thief albums but, once the flame is ignited, these songs provide warmth and reassurance like the open fire it’s possible to imagine Lenker lighting when decamped in the American outdoors.

The songs are delicately imparted, withdrawn yet intimate and centred around her uniquely affecting voice. Not for the first time her vocals suggest something of a paradox – brittle and exposed yet also steadfast and enduring. Lenker commented how these songs have helped her heal and, given they contain some of her most personal lyrics yet, it’s easy to see why.

On Anything she sings “I don’t wanna talk about anyone, I wanna sleep in your car while you’re driving, lay in your lap when I’m crying”, lines that demonstrate how tenderness and vulnerability continue to be two of her defining traits. A detached, lost sadness consumes Come meanwhile, seeing her confide semi-uncomfortable lines like “come help me die, my daughter” over ruminative guitar lines.

Not A Lot, Just Forever finds her arguably at her most revealing and stark as she sings of how “Your dearest fantasy is to grow a baby in me, I could be a good mother and I want to be your wife”. It’s followed by Dragon Eyes which sees her further explore sensuality and relationships in open, unguarded fashion (“The coastline is shaped by the wind, as we make love and you’re on my skin, you are changing me, you are changing”). They are two of several tracks that document her fascination with how human beings co-exist, interact and become one.

The Instrumentals album is naturally a looser, less magnified affair, consisting of collages of the exploratory, freeform acoustic guitar improvisations that each day of the recording sessions would begin with. They showcase a different side to her creative process, but it’s undoubtedly on Songs where the emotional impact is located. These are confessional songs curled in the foetal position, creations that have turned their back against the harshness of the outside world, preferring to seek comfort inside. Along the way memories are recalled and desires articulated and it’s so candid and unshielded it feels like we’re peering into her psyche, where we find moments where she’s alternately stoic, sanguine, troubled and enraptured. For a performer who already elicits powerful reactions, this latest release offers new opportunities for fans to further deepen the relationship and find tiny new worlds to get lost in.